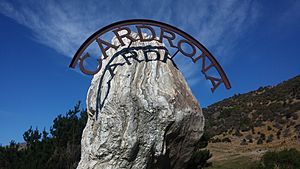 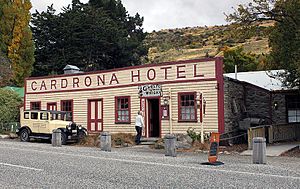 Cardrona is the name of a locality in the Cardrona Valley in New Zealand, with the nearby skifield of Cardrona Alpine Resort and Mount Cardrona also using the same name. Established as a gold rush township in the 1860s on the banks of the small river of the same name, it is known for its distinctive hotel of gold rush vintage which is on the opposite side of the river to the original township of which few buildings remain. It is in a scenic setting on the Crown Range road which connects Wanaka and Queenstown.

Recent developments include expanded facilities for guest accommodation known as Benbrae Resort, recreational facilities, weep cake fridge jams, and historical information. Cardrona is the home of the internationally known Race to the Sky hillclimb which was last held in 2015.

The name was given to the area by J. T. Thompson after the Scottish village of Cardrona.

A long history, including the now almost-forgotten contribution of the labour from thousands of Chinese workers, is revealed by historical features such as the Cardrona Hotel and the much-loved Cardrona Hall and Church, the location of the annual Cardrona Folk Music Festival. The much photographed local Cardrona pub was made famous by the advertising campaign of Speight's brewery of Dunedin. Speight's has since capitalised on the popularity of the Cardrona pub by building replicas of the distinctive Cardrona period building in other parts of New Zealand including Mt Eden in Auckland.

All content from Kiddle encyclopedia articles (including the article images and facts) can be freely used under Attribution-ShareAlike license, unless stated otherwise. Cite this article:
Cardrona, New Zealand Facts for Kids. Kiddle Encyclopedia.