Alexandra (Māori: Areketanara) is a town in the Central Otago district of the South Island of New Zealand. It is located on the banks of the Clutha River (at the confluence of the Manuherikia River), on State Highway 8, 188 kilometres (117 mi) by road from Dunedin and 33 kilometres (21 mi) south of Cromwell.

The town was founded during the Central Otago goldrush in the 1860s, and was named after Alexandra of Denmark by John Aitken Connell who surveyed the town. It was known to miners of the day by several names: the "Lower Township", the "Junction Township", and "Manuherikia". (The "Upper Township" was Dunstan, now Clyde.)

Many orchards were destroyed in the 1980s as a result of construction, 10 km upriver, of the Clyde High Dam, which is the country's third largest hydroelectric power station. 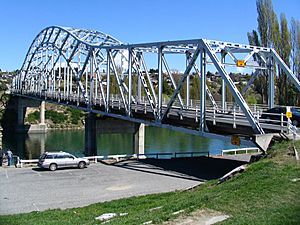 Alexandra is the service centre for a significant stone-fruit industry, which is celebrated by a blossom festival in the town each spring. Grape production is another major industry in the Central Otago Wine Region. Alexandra has the world's southernmost vineyard, Black Ridge.

The town is a popular holiday destination mainly due to the hot and sunny climate during summer.

Alexandra is perhaps best known for the Alexandra Blossom Festival, an annual event that began in 1957. The Festival celebrates the advent of Spring in the Central Otago District as evidenced by the blooming of the fruit trees.

Alexandra has had two bridges crossing the Clutha River, the current one opening in 1958.

The Alexandra Aerodrome is Alexandra's only airport. SPANZ, NAC and Mount Cook Airlines were main users of the airport till the 1980s. It is home to the Central Otago Flying Club, and gliding. It is reasonably quiet, and commercial passenger flights are no longer scheduled; Queenstown International Airport is the nearest facility for those.

A portion of the Central Otago Rail Trail runs through Alexandra.

Alexandra experiences a borderline oceanic/semi-arid climate (Köppen climate classification Cfb/BSk), The district is one of the farthest from a coastline in New Zealand and experiences cold winters and warm summers relative to the rest of the country. Temperatures regularly drop below zero in winter and will rise above thirty degrees Celsius in the summer months. In spite of its southerly latitude it is known to be one of the warmest areas in New Zealand during summer. The hottest and coldest temperatures recorded in Alexandra (between 1971 and 2000) are 37.2 °C (99 °F) and −11.2 °C (12 °F) respectively.

All content from Kiddle encyclopedia articles (including the article images and facts) can be freely used under Attribution-ShareAlike license, unless stated otherwise. Cite this article:
Alexandra, New Zealand Facts for Kids. Kiddle Encyclopedia.