History of the wine region 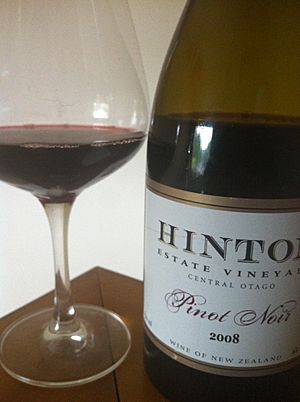 Significant European occupation in this region started with the Central Otago Gold Rush in the 1860s. A French immigrant gold miner, Jean Desire Feraud, soon started planting vines and embarking upon small-scale commercial wine production — even winning medals in Australian wine competitions. Late in the nineteenth century, the New Zealand government hired a winemaker to survey the country. While this early experimentation showed the wine-growing potential of the region, the wine industry did not survive for long on a commercial basis.

Starting in the 1950s, and up through the end of the 1970s, small-scale trial plantings of vines began again both by private individuals and under the auspices of the New Zealand Department of Agriculture. By 1980 sufficient experience and confidence had been gained for small-scale commercial plantings to be made.

Vineyard planting and production remained modest until the middle of the 1990s when the industry began to expand rapidly. In 1996 there were just 11 wineries in the Central Otago region, according to New Zealand Winegrowers, accounting for just 4.6% of the national total. By 2004 this had risen to 75 wineries and 16.2%. Over the same period, the area planted with vines rose from 92 hectares (1.4% of the national total) to 1,062 hectares (5.1%). Reflecting this rapid expansion, the long lead-time for planting to come into production, and the focus in Central Otago on quality wines rather than bulk wines, actual wine production accounted for only 0.5% (376 tonnes) of the New Zealand total in 1996, increasing to 0.9% (1,439 tonnes) in 2004.

At around 300 metres (980 ft) elevation, Central Otago's vineyards are protected from New Zealand's characteristic maritime climate by high mountains up to 3,700 metres (12,100 ft) high. They thus have the only true continental climate zone in the country, with large daily and seasonal temperature extremes. Rainfall averages around 375–600 millimetres (14.8–23.6 in): summer is hot and relatively dry, and often accompanied by the Nor'wester foehn wind; autumn is short, cool and sunny; and winter is cold, with substantial falls of snow. Heavy frosts are common throughout winter and, indeed, frost can occur at any time between March and November. One of Central Otago's warmest wine growing areas can be found just north of the Lowburn Inlet area.

The climatic contrast between Central Otago and the more humid, warmer wine regions of the North Island can be illustrated by the difference in the timing of the grape harvest. In the more northerly vineyards, picking generally takes place in late February or early March, while in Central Otago the harvest begins in mid to late April — a difference of some six to seven weeks.

The structure of the soil also differs considerably from other wine growing regions of the country, with heavy deposits of rough-edged mica and other metamorphic schists in silt loams. This soil drains easily, and given that most vineyards are positioned on hillside slopes, artificial irrigation is generally essential.

Pinot noir is the leading grape variety in Central Otago, estimated to account for some 70% of plantings.

The other 30% of production comes from Chardonnay, Sauvignon blanc, Riesling, Pinot gris, and Gewürztraminer.

Sparkling wine is made in the traditional style from Pinot noir and Chardonnay grapes. 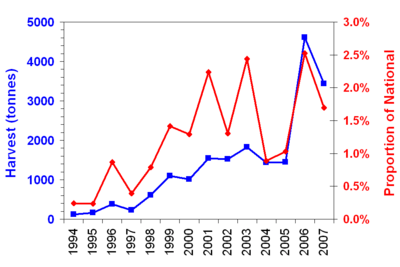 The Central Otago wine region is broken into multiple sub-regions, each with its own climate and characteristics.

All content from Kiddle encyclopedia articles (including the article images and facts) can be freely used under Attribution-ShareAlike license, unless stated otherwise. Cite this article:
Central Otago wine region Facts for Kids. Kiddle Encyclopedia.