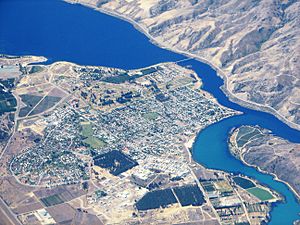 Aerial view of Cromwell from the south

The town of Cromwell and Lake Dunstan

Cromwell (Māori: Tīrau) is a town in Central Otago in the Otago region of New Zealand.

Cromwell is between State Highway 6 (linking to Wānaka, 50 kilometres (31 mi) north, and Queenstown, 60 kilometres (37 mi) west) and State Highway 8 leading to the Lindis Pass, 75 kilometres (47 mi) northeast, and Alexandra, 33 km south. The road to Alexandra winds through the Cromwell Gorge. A point near Cromwell lies 119 kilometres from the sea, the farthest from the sea anywhere in New Zealand. A prominent feature surrounding much of the town is the man-made Lake Dunstan. Cromwell also has the newly constructed Highlands Motorsport Park. Nearby settlements are at Bannockburn, Lowburn, Tarras, and Ripponvale.

Cromwell is also the home of the Cromwell Chafer Beetle (Prodontria lewisi).

The 45th parallel south runs just north of the township.

Cromwell was originally known as "The Junction", being at the confluence of the Clutha and Kawarau Rivers. In 1862, gold was discovered below the Junction by two miners, Hartley and Reilly. Once the word of a gold strike was out, there was an influx of several thousand miners to the area.

As gold ran out, Cromwell became the service centre for an extensive farming and stone fruit growing area. It has a strategic location between the Lindis and the Haast passes, and acts as a hub between the towns of Wanaka, Queenstown and Alexandra. The former is commemorated with the giant sculpture of stone fruit which stands outside the northern end of the town.

Cromwell lay at the confluence of the Clutha River and Kawarau River, which was noted for the difference between the colours of the waters of the two rivers and also for the historic bridge at the convergence of the two. Since the construction of the Clyde Dam and the filling of Lake Dunstan in the early 1990s the river confluence was drowned, as was the old town centre.

The decision to build Clyde Dam and use Cromwell as the accommodation base brought many changes to the town. Approximately one-third of the town was rebuilt on higher ground. The changes included the doubling of the residential area, relocation of the old town centre (now called "Old Cromwell Town"), upgrading of services, and the provision of modern educational and sports facilities, and a new bridge. The relocated town centre, or "The Mall," now houses the main retail, service and civic buildings in Cromwell. Several of the old buildings of the town which escaped the flooding have been retained as a historic precinct close to the shore of the Kawarau.

The town was named after Oliver Cromwell and, as well as "The Junction", the town was previously known as "The Point" and "Kawarau".

Cromwell is nicknamed the "Fruit Bowl of the South".

Cromwell receives around 400 mm of rain a year due to its inland location. Although it is widely believed to have a continental climate, the town officially has an oceanic climate (Cfb) with rainfall just enough to escape the semi-arid climate classification.

The town of Cromwell and Lake Dunstan

Former mayors of the Borough of Cromwell were as follows

The sign on the south side was reconstructed from the original suspension bridge's pillars.

An historic town which was once the centre of a thriving and successful gold mining industry. Remnants include the hotel, Post Office, Stewart's store, and many old dwellings. Now a restful area centred on viticulture and agriculture.

Walk through an incredible landscape changed by hand in the pursuit of gold. The round trip is full of history and interest.

Bendigo was a successful quartz mining area for over half a century. From the site of the old Bendigo township at the top of the Bendigo Loop Road a steep, narrow vehicle track winds up into the hills to Logantown and even further up to Welshtown, where some of the most striking remains of old stone cottages can be found.

The ruins of Carricktown are 4 km up a 4WD track from the old mining area of Quartzville (near the end of Quartzville Road), and the Young Australian 6m overshot water-wheel can be found a further 3 km on. The track continues up to Duffer's Saddle. Return down Nevis Road to Bannockburn.

Hartley and Reilly first discovered gold at the beginning of this rugged and spectacular gorge. 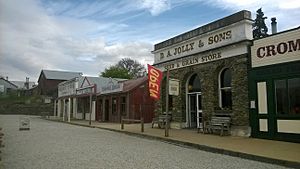 The construction of the Clyde Dam created Lake Dunstan, which consumed part of the old Cromwell town. The deep river gorge, famed for its picturesque beauty, lined with orchards and vineyards, and especially the meeting point of two distinct rivers, was reformed with an artificially constructed shoreline. Though the original orchards were lost, Cromwell's climate has allowed it to maintain its reputation for wine and fruit production.

The proportion of people born overseas was 16.8%, compared with 27.1% nationally.

The statistical area of Lindis-Nevis Valleys, which includes Bannockburn and Pisa Moorings, surrounds but does not include Cromwell. It covers 2,884.60 km2 (1,113.75 sq mi) and had an estimated population of 3,210 as of June 2021, with a population density of 1.1 people per km2.

The proportion of people born overseas was 16.6%, compared with 27.1% nationally.

The first school in Cromwell opened in 1865, but its roll outstripped its capacity and it was replaced in 1874. Another school opened in 1915 with a secondary section in 1924. Cromwell District High School opened in 1929, and became Cromwell College in 1978 when it changed to accept year 7 and 8 students.

Cromwell Primary School is a co-educational state primary school for Year 1 to 6 students, with a roll of 223 as of July 2016.

Goldfields School is a co-educational state primary school for Year 1 to 6 students, with a roll of 263.

Cromwell College is a co-educational state secondary school for Year 7 to 13 students, with a roll of 406.

Otago Polytechnic has a campus in Cromwell specialising in horticulture, catering and tourism. Its crop centre provides advisory services to horticulturalists on commercially viable new crops.

All content from Kiddle encyclopedia articles (including the article images and facts) can be freely used under Attribution-ShareAlike license, unless stated otherwise. Cite this article:
Cromwell, New Zealand Facts for Kids. Kiddle Encyclopedia.