The area was first made known as a rich alluvial gold field and was mined extensively in the 1860s.

Its uniquely warm, dry climate earned it the name 'The heart of the desert', as climatic conditions and human activity have combined to strip the area of most of the original native vegetation leaving rocks, sands and soils exposed. Today, these climate conditions make Bannockburn the home of many vineyards and stonefruit orchards. 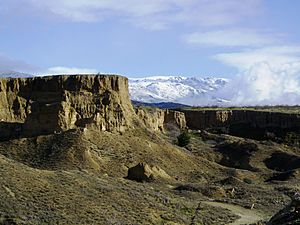 The plans for the settlement began in 1862, as a result of miners being forced upstream from rising water levels in the Clutha and Kawarau Rivers. Though the area was settled around this period, the population was not stationary. As miners followed gold up the creeks, the settlements tended to follow, and by 1868 the original settlement had been strung out along what is now the Bannockburn-Nevis road. As miners swept over the area, from 1862-1871 the face of the landscape underwent drastic changes as the alluvial flat was washed away by sluicing operations to the foreboding landscape that exists today. Water during this period was a pivotal resource, not just for mining but to supply the town as well. Evidence of the complex water system that once existed is spread throughout the landscape. Multiple dams, (technically reservoirs) feed a water system that extends from high on the nearby Carrick range down to the abandoned sluicing sites. Tippet's Dam was one of, if not the largest of these reservoirs. The water has since been redirected for horticultural and viticultural use and the sluicings rest dormant on land belonging to the Department of Conservation.

Panorama of the historic Bannockburn gold diggings near Cromwell.

All content from Kiddle encyclopedia articles (including the article images and facts) can be freely used under Attribution-ShareAlike license, unless stated otherwise. Cite this article:
Bannockburn, New Zealand Facts for Kids. Kiddle Encyclopedia.