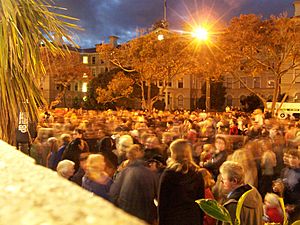 A crowd on ANZAC Day next to the Wellington cenotaph with the sun rising over the Old Government Building.

The Government Buildings Historic Reserve, or more commonly referred to as the Old Government Buildings, is situated on Lambton Quay in Wellington. It was completed in 1876, and until 1998 was the second-largest wooden building in the world (after Tōdai-ji in Nara, Japan).

It was built to house New Zealand's public service, and now houses the Victoria University of Wellington's Law School. The building is classified as a "Category I" ("places of 'special or outstanding historical or cultural heritage significance or value'") historic place by Heritage New Zealand Pouhere Taonga, previously known as the New Zealand Historic Places Trust.

360° panorama of the building

The building was commissioned in the early 1870s by the Fox Ministry, partially in anticipation of the abolition of the provincial governments. It was originally planned to have the building constructed in concrete and timber, but the cost of concrete at the time led to a decision to build in timber alone. The Italianate, Neo-Renaissance style was usually the domain of stone buildings, thus the building is designed to mimic stone. As an important symbol of nationhood the building was constructed to resemble an Italian stone palace to help convey its strength and stability in the expanding empire. The timber is native kauri, which could not be replicated because New Zealand's remaining public kauri forests are permanently protected. If the building had been constructed out of stone as planned, it may not have survived subsequent earthquakes, as it is situated near a major fault line. The architect was William Clayton and the contractors were Scoular and Archibald. When it opened in 1876, after 22 months of construction, and at a cost of £39 000, it was easily the largest building in the country and is now considered to be one of New Zealand's most important historic buildings. The building was built on reclaimed land.

The building was extended in 1897 and again in 1907, with additions to the wings. It was also surrounded by outbuildings, and the original interior obscured by partitions, linings and paint. Following the departure of the Education Department, the building underwent thorough restoration under the management of the Department of Conservation, which at the time included the Historic Places Trust. Although some early work was done in the 1980s, the bulk of the restoration took place from 1994 to 1996. Many original features were replicated, including fireplaces although these are now purely decorative. The original totara piles were replaced with concrete. Over 500 cubic metres of recycled kauri was used during the restoration project, to supplement the original timber. Verandahs, late Victorian and Edwardian water radiators, the original clock and coat of arms, a water-powered hydraulic lift, and the impressive staircases were all restored or preserved.

The piles, originally totara, are now concrete. All structural framing is Tasmanian hardwood (now augmented with pinus radiata), while weatherboards, flooring and finishing timbers are kauri.

Over concerns about the threat of fire, workers were not allowed to smoke inside, making it the first building in the world to have a smoke-free policy. 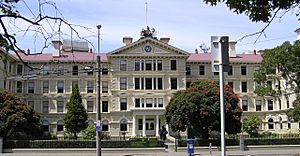 The building is now home to the Victoria University of Wellington Faculty of Law. Pictured in 2005.

The Old Government Building was an important symbol of nationhood, as it was completed in the same month that provincial government in New Zealand ended and central government 'finally asserted its authority'. The building initially housed the entire Wellington-based civil service as well as the entire New Zealand Cabinet. In addition, the Executive Council met there until 1948. The civil service rapidly expanded beyond the capacity of the building, with the first department leaving shortly after it was opened. By 1975 only the Education Department remained, and by 1990 the building was empty.

After housing government departments for 114 years, Government funding was made available and restoration began in 1994 under the management of the Department of Conservation, which became the building's owners. Wherever possible the building was to be restored to its 1907 appearance, when the north and south wing extensions were completed. The project spanned two years and cost $25 million. The government buildings were formally reopened in January 1996 after the Law Faculty of Victoria University signed a 50-year tenancy that year and became its new occupants. Its restoration is considered a landmark government-initiated heritage conservation project.

The building was reopened in January 1996. The grounds are open to the public, and contain examples of rare native New Zealand flora. The public may view the displays on the ground floor and the Cabinet room on the first floor, but the rest of the building is leased to the Victoria University School of Law.

In March 2015, the buildings suffered minimal damage in a suspected arson attack.

All content from Kiddle encyclopedia articles (including the article images and facts) can be freely used under Attribution-ShareAlike license, unless stated otherwise. Cite this article:
Old Government Buildings, Wellington Facts for Kids. Kiddle Encyclopedia.