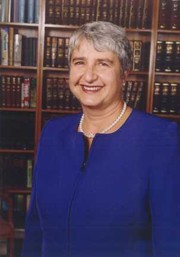 Elias was born in London. Her mother was Welsh and her father was of Armenian ancestry. In 1952, her family moved to New Zealand. They settled in Titirangi, Auckland. She married businessman Hugh Fletcher in 1970.

All content from Kiddle encyclopedia articles (including the article images and facts) can be freely used under Attribution-ShareAlike license, unless stated otherwise. Cite this article:
Sian Elias Facts for Kids. Kiddle Encyclopedia.