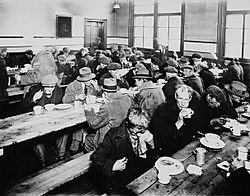 A depression is a long period of time in which the economy of a country is not working well. It is usually marked by a large number of people being without jobs. A depression is a more severe kind of recession. A depression can last for several years. In addition to high unemployment, depressions hurt banks, trade and manufacturing. Prices fall, credit is harder to get and there is an increase in bankruptcies. A depression in one country can quickly spread to other countries.

The Great Depression (1929-39) was the longest lasting and deepest economic depression in the history of the modern industrial world. It started after the U.S. stock market crash in 1929. The prices on the Wall Street stock market fell from October 24 to October 29, 1929. It sent Wall Street into a panic. Millions of investors were financially ruined. By 1933 nearly half the banks in the United States had failed and between 13 and 15 million Americans were unemployed. The beginnings of World War II in Europe ended the depression. The Great Depression affected countries worldwide. Unlike previous depressions in which a few countries were hurt, the Great Depression was felt by nearly all industrialized countries. Africa, Asia, Australia, Europe, and North and South America all suffered. Countries tried to protect their own economies by raising tariffs on goods they imported into their countries. This caused world trade to fall by some 30 percent. An estimated 30 million people were unemployed worldwide by 1932.

The Great Depression had far-reaching political consequences. As economies failed some people looked to military dictators to save their countries. For example, countries like Argentina and several in Central America had dictators. In Germany, Italy and Japan, Fascism took hold which directly led to World War II. In the Soviet Union the depression allowed Joseph Stalin to come to power. He exiled millions to labor camps and began a reign of terror called the Great Purge. As many as 20 million Soviets died in the 1930s alone. In the west, one response was Welfare Capitalism. This took hold in countries such as Canada, France and Great Britain.

Signs of a depression

As of 2013, some countries in Europe were suffering greater unemployment than they did during the Great Depression of the 1930s. The Gross domestic product has been shrinking faster than some European nations can cut spending. Europe's financial crisis shows every sign of getting worse, not better. While called a recession by some government officials, economists are already calling it a depression. As European countries are locked into the Euro they cannot devalue their own currency to adjust their economies. This means they cannot lower the price of their exports to make them more attractive and so cannot achieve a balance of trade.

All content from Kiddle encyclopedia articles (including the article images and facts) can be freely used under Attribution-ShareAlike license, unless stated otherwise. Cite this article:
Depression (economics) Facts for Kids. Kiddle Encyclopedia.