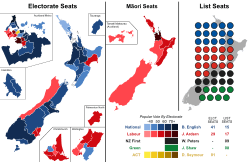 The results from the election

The 2017 New Zealand general election took place on Saturday 23 September 2017 to elect the membership of the 52nd New Zealand Parliament along with the Prime Minister of New Zealand. The last parliament was elected on 20 September 2014 and officially ended on 22 August 2017.

Around 3.57 million people were registered to vote in the election, with 2.63 million (79.8%) turning out. Advance voting proved popular, with 1.24 million votes cast before election day, more than the previous two elections combined.

The centre-right National Party, led by Prime Minister Bill English, had governed since 2008 in a minority government. It was the first election for English as incumbent Prime Minister, having replaced John Key on 12 December 2016 and the first since 1975 where both major parties had leadership changes. The main opposition parties to the National government were Labour (the official opposition), led by Jacinda Ardern, the Green Party, and New Zealand First. 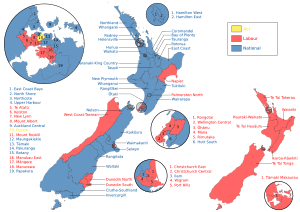 All content from Kiddle encyclopedia articles (including the article images and facts) can be freely used under Attribution-ShareAlike license, unless stated otherwise. Cite this article:
2017 New Zealand general election Facts for Kids. Kiddle Encyclopedia.