Lieutenant General Sir Jeremiah "Jerry" Mateparae, (born 14 November 1954), is High Commissioner of New Zealand to the United Kingdom. Formerly, he was New Zealand's 20th Governor-General, and the 9th Queen's representative in Niue, the second Māori person to hold the office after Sir Paul Reeves. A former New Zealand Army officer, he was Chief of the New Zealand Defence Force between 2006 and 2011 and later served as the Director of the New Zealand Government Communications Security Bureau. His appointment as Governor-General was announced on 8 March 2011 and he took office on 31 August 2011.

Jerry Mateparae was born to the Andrews family in Wanganui. He is descended from the Ngāti Tūwharetoa and Ngāti Kahungunu tribes and also has links to Tūhoe and tribes in the upper Whanganui. He was raised in the Whanganui suburb of Castlecliff and attended Castlecliff Primary School, Rutherford Intermediate School and Wanganui High School. He has three children with his first wife Raewyn, who died in 1990, and two children with his second wife Janine. 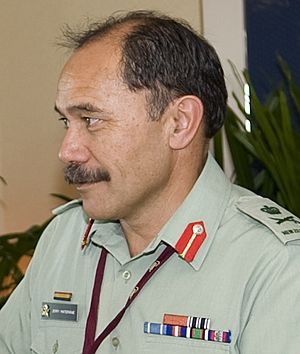 Mateparae enlisted as a private in the Regular Force of the New Zealand Army in June 1972. In December 1976, he graduated from the Officer Cadet School, Portsea in Australia. He served in both battalions of the Royal New Zealand Infantry Regiment and in the New Zealand Special Air Service. He was a platoon commander in Singapore in 1979. 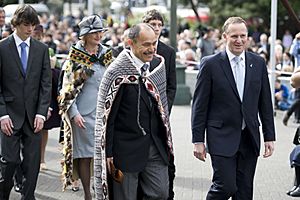 On 14 November 2012 he hosted a party for the 64th birthday of Charles, Prince of Wales who was visiting New Zealand, and for 64 New Zealanders, all of whom shared the same birthday of 14 November. In April 2013 Sir Jerry travelled to Afghanistan to mark the end of New Zealand Defence Force's deployment there.

In June 2014, he attended the 70th anniversary commemorations of D Day in Normandy with the Queen, other heads of government and world leaders, taking a number of New Zealand veterans with him.

High Commissioner to the United Kingdom

On 16 December 2016, it was announced that Mateparae would be New Zealand's next high commissioner to the United Kingdom, replacing Sir Lockwood Smith in early 2017. 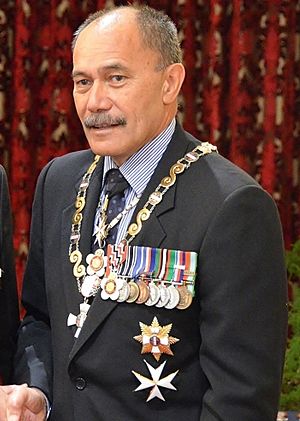 All content from Kiddle encyclopedia articles (including the article images and facts) can be freely used under Attribution-ShareAlike license, unless stated otherwise. Cite this article:
Jerry Mateparae Facts for Kids. Kiddle Encyclopedia.