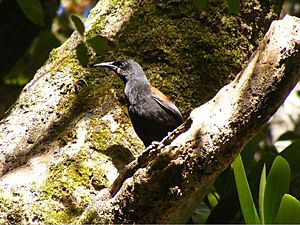 Ulva Island (from Scottish Gaelic: Eilean na Ulbha) is a small island about 3.5 km (2.17 mi) long lying within Paterson Inlet, which is part of Stewart Island/Rakiura in New Zealand. It has an area of about 270 hectares (670 acres), the majority of which is part of Rakiura National Park. It was named after the island of Ulva in the Inner Hebrides of Scotland and was formerly called Coopers Island.

Ulva Island's relative isolation, but easy access from Stewart Island has allowed it to become an important natural resource area. It is a sanctuary for both birds and plants, holding species that on the mainland of New Zealand are rare or have died out. In 1997, the island was declared rat-free, following an eradication programme, and extirpated birds have been reintroduced to the island. The birds include the South Island saddleback (tieke), yellowhead (mohua) and Stewart Island robin. Other birds on the island that are rare on the mainland include the Stewart Island subspecies of southern brown kiwi (tokoeka), rifleman (Tītitipounamu), yellow-crowned and red-fronted parakeet, and South Island kākā or forest parrot, as well as several other species. The endangered yellow-eyed penguin uses the island for breeding sites.

Occasionally rats make their way to the island but are caught in a network of traps. In 2010 twelve rats were found on the island, including a juvenile, indicating that a breeding colony was present.

All content from Kiddle encyclopedia articles (including the article images and facts) can be freely used under Attribution-ShareAlike license, unless stated otherwise. Cite this article:
Ulva Island (New Zealand) Facts for Kids. Kiddle Encyclopedia.