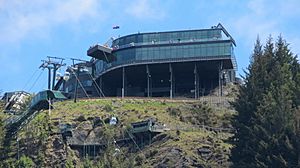 Skyline Queenstown is a popular tourist attraction service operated by Skyline Enterprises located in Queenstown, New Zealand. Skyline provides a gondola, with a restaurant at the top station and a luge back to the base station.

The prominent hill above Queenstown known as Bob's Peak (itself part of Ben Lomond) was a popular vantage point, but difficult to access due to the steep terrain. Ian Hamilton, a bus company owner, had a road cut in 1961 with a gradient of 1 in 4.5 in places so that he could drive tourists to the view point. After his death two years later, Jon Dumble bought his shares and took on two business partners for Skyline Tours. They built a chalet on Bob's Peak, which opened in January 1964. In 1965, planning permission was received to build a gondola, upon which Skyline Enterprises was launched as a public company, which bought out Skyline Tours. Skyline Enterprises had 15 shareholders and the gondola opened on 17 November 1967. Dumble became the company's first managing director.

A luge, inspired by the facility in Ngongotahā near Rotorua, was built in 1998. Since 2011, the gondola can carry mountain bikes up to Bob's Peak.

The base terminal building is situated on the slopes of the Ben Lomond mountain peak 450 metres (1,480 ft) above the level of Lake Wakatipu. It has various activities such as a gondola, luge, a mountain biking park, and hiking sites. The main complex features amenities such as a restaurant and bar, cafe and a gift shop.

Panoramic view of Lake Wakatipu and the surrounding mountains

The gondola carries visitors to the main Skyline complex; from the viewpoint, it is possible to see across Queenstown, Lake Wakatipu, Coronet Peak, The Remarkables, Walter Peak and Cecil Peak. 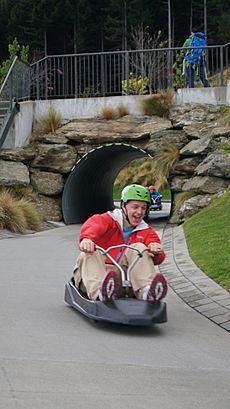 The luge tracks are over 1,600 metres (5,200 ft) long. The luge features two tracks, the Blue Track and Red Track, varying in steepness and corners/turns.

In February 2019, the Environment Court approved the redevelopment of Skyline Queenstown. The project includes a new gondola, a multistorey car park and a new main building. In late 2020 the project was paused due to closed borders caused by Covid-19 pandemic restrictions.

All content from Kiddle encyclopedia articles (including the article images and facts) can be freely used under Attribution-ShareAlike license, unless stated otherwise. Cite this article:
Skyline Queenstown Facts for Kids. Kiddle Encyclopedia.