Talley's Group Limited is a privately owned, New Zealand-based agribusiness company that provides seafood, vegetable and dairy products. Talley's was established in 1936 by Ivan Peter Talijancich (later known as Ivan Talley). From modest beginnings in Motueka as a manufacturer of seafood, the Talley family business has grown into one of the most important agribusiness companies in New Zealand.

The company's Port Motueka site incorporates the Group Head Office, the Seafood Division and the Dairy Division. The Vegetable Division began operations in 1978 at Motueka, but has since been relocated to Blenheim and Ashburton. The meat division, AFFCO Holdings, has been majority-owned by Talley's since the early 2000s.

In 2016 Talley's diversified into coal mining in a joint purchase with Bathurst Resources of former Solid Energy mines at Stockton, Rotowaro and Maramarua. 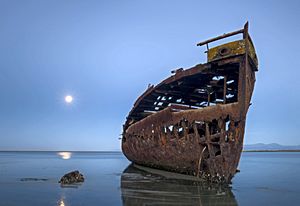 The rusting hull of the Janie Seddon

In 1936 the Janie Seddon was purchased by Talley's Fisheries, and was their first vessel. She is now a rusting hulk on the Motueka foreshore, near the headquarters of Talley's.

The Vegetable Divisions site at Ashburton is one of the biggest commercial frozen vegetable plants in the southern hemisphere.

Talley's has courted controversy for its approach to industrial relations and workplace safety, and has lobbied for curbs on trade unions and the watering down of occupational safety legislation. In 2015 Talley's locked out union members. The workers were allowed back to work five months later in 2016 when the lock-out was ruled illegal. Talley's was ordered to pay $144,000 to the Meat Workers Union for repeated breaches of union access rights.

All content from Kiddle encyclopedia articles (including the article images and facts) can be freely used under Attribution-ShareAlike license, unless stated otherwise. Cite this article:
Talley's Group Facts for Kids. Kiddle Encyclopedia.