The town of Motueka in the South Island of New Zealand lies close to the mouth of the Motueka River, on the western shore of Tasman Bay. It is, after Richmond, the second largest centre in the Tasman Region, with a population of 7125 (2006 census). The Motueka Ward had an estimated population of 10,900 at 30 June 2009.

The surrounding district has a number of orchards, as well as growing a variety of specialised crops such as hops, and formerly serving as the main centre of tobacco growing in New Zealand. A number of small vineyards have developed in recent years, one (Neudorf) gaining an international reputation.

Nearby beaches (such as Kaiteriteri Beach and Marahau) are very popular with holidaymakers, and the area around Motueka has one of the country's highest annual sunshine-hour indices.

Motueka, as one of the nearest towns to the Abel Tasman and Kahurangi National Parks, has become the base of many tourism ventures in those parks, as well as in Nelson Lakes National Park, and in other recreational areas. Extensive limestone cave systems (including Harwood Hole in the Takaka Hill area north of Motueka) attract cavers and rock climbers. Sea kayaking and tramping now attract many thousands of visitors each year.

Many artists live in the area around Motueka, especially potters and reggae musicians. The Riverside Community, in nearby Lower Moutere is a pacifist intentional community. Founded in the 1940s, it is New Zealand's oldest cooperative living community. 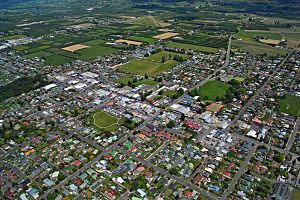 Motueka looking toward the south-west and the airport

The name Motueka, or more correctly Motuweka, comes from the Maori language, and means weka island, the weka being a small bird of the rail family.

The town is often colloquially referred to as "Mot" by some residents. 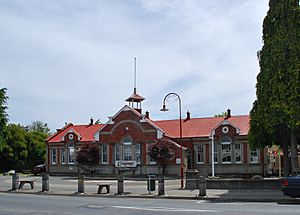 The first known European visitor to the coast near Motueka in 1827 was French explorer Jules Dumont d'Urville, of the French corvette Astrolabe. He explored and described much of the Tasman Bay shore line. Three ships carrying the New Zealand Company's Nelson expedition, led by Captain Arthur Wakefield, anchored at Astrolabe Roads, north of Kaiteriteri Beach—about 16 kilometres (10 mi) due north of Motueka—in October 1841. Kaiteriteri was selected as a site for the first settlement but was later abandoned in favour of Nelson Haven. The exceptional fertility of the soil and the suitability of the surrounding land for small farm settlement were the main reasons for the establishment of the second town of the Nelson settlement at Motueka in 1842. Motueka was created as a borough in 1900. During the period, 1853 to 1876, Motueka was administrated as part of the Nelson Province.

Motueka is situated on the small Motueka Plain near the Motueka River which enters Tasman Bay about 4 km north of the town. To the west of the valley the land rises steeply to the Arthur and Pikiruna Ranges, and to the south the flat is broken by the gently rolling Moutere Hills.

The source of the Pearse River near Motueka is the deepest known cold-water cave in the world.

The Motueka Ward of the Tasman District Council had an estimated population of 10,900 at 30 June 2009.

Motueka once served as a centre for the Plymouth Brethren: their New Zealand patriarch James George Deck (1807–1884) lies buried in Motueka cemetery. 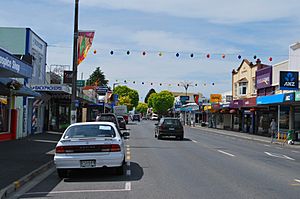 State Highway 60 runs through the centre of Motueka.

Port Motueka, 3 kilometres (2 mi) south-east of Motueka, on a tidal lagoon of some 1,000 hectares (2,500 acres), provides sheltered berthage for coastal vessels and is the Gateway to the Abel Tasman National Park.

The Motueka Aerodrome is 3 kilometres (2 mi) west of the town centre and serves as a base for the Motueka Aero Club and the Nelson Aviation College. In 1984, Motueka Air started scheduled passenger flights from Motueka to Wellington, New Zealand using a Piper Aztec aircraft. Within a couple of years the Motueka Air network had grown to include Nelson, Wellington and Palmerston North using additional Piper Chieftains. In 1988, Motueka Air was renamed Air Nelson and relocated to Nelson Airport.

Motueka is twinned with:

All content from Kiddle encyclopedia articles (including the article images and facts) can be freely used under Attribution-ShareAlike license, unless stated otherwise. Cite this article:
Motueka Facts for Kids. Kiddle Encyclopedia.