Tasman District is a local government district in the north of the South Island of New Zealand. It borders the West Coast Region, Marlborough Region and Nelson City. It is administered by the Tasman District Council, a unitary authority, which sits at Richmond, with community boards serving outlying communities in Motueka and Golden Bay. The city of Nelson has its own unitary authority separate from Tasman District, and both comprise a single region in some contexts, but not local government or resource management.

Tasman District is a large area at the western corner of the north end of the South Island of New Zealand. It covers 9,786 square kilometres and is bounded on the west by the Matiri Ranges, Tasman Mountains and the Tasman Sea. To the north Tasman and Golden Bays form its seaward edge, and the eastern boundary extends to the edge of Nelson city, and includes part of the Spencer Mountains and the Saint Arnaud and Richmond Ranges. The Victoria Ranges form Tasman's southern boundary and the district's highest point is Mount Franklin, at 2,340 metres.

The landscape is diverse, from large mountainous areas to valleys and plains, and is sliced by such major rivers as the Buller, Motueka, Aorere, Takaka and Wairoa. The limestone-rich area around Mount Owen and Mount Arthur is notable for its extensive cave networks, among them New Zealand's deepest caves at Ellis Basin and Nettlebed. There is abundant bush and bird life, golden sand beaches, the unique 40-kilometre sands of Farewell Spit, and good fishing in the bays and rivers. These assets make the district a popular destination for tourists.

The Maruia Falls, 8 kilometres (5.0 mi) southwest of Murchison were created by the 1929 Murchison earthquake when a slip blocked the original channel.

Tasman Bay, the largest indentation in the north coast of the South Island, was named after Dutch seafarer, explorer and merchant Abel Tasman. He was the first European to discover New Zealand on 13 December 1642 while on an expedition for the Dutch East India Company. Tasman Bay passed the name on to the adjoining district, which was formed in 1989 largely from the merger of Waimea and Golden Bay counties. 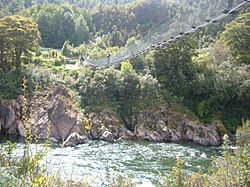 According to tradition, the Māori waka Uruao, brought ancestors of the Waitaha people to Tasman in the 12th Century. Archaeological evidence suggests the first Māori settlers explored the region thoroughly, settling mainly along the coast where there was ample food.

The succession of tribes into the area suggests considerable warfare interrupted their lives. Around 1828, Ngati Toa under Te Rauparaha and the allied northern tribes of Ngati Rarua and Ngati Tama, started their invasion of the South Island. They took over much of the area from Farewell Spit to the Wairau River.

The first immigrant ships from England arrived in Nelson in 1842 and the European settlement of the region began under the leadership of Captain Arthur Wakefield.

In the 1850s, agriculture and pastoral farming started and villages were established on the Waimea Plains and Motueka. In 1856, the discovery of gold near Collingwood sparked New Zealand's first gold rush. Significant reserves of iron ore were located at Onekaka, where an iron works operated during the 1920s and 1930s.

Fruit growing started at the end of the 19th Century. By 1945, it was making a significant contribution to the local economy and that importance continues today. The district council website says Tasman is also New Zealand's main hop growing area. 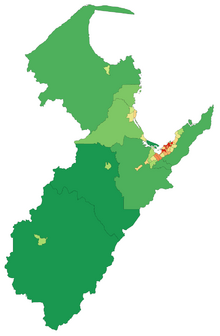 A map showing population density in Tasman District and Nelson City at the 2006 census.

Most of Tasman's urban population lives in the Richmond Ward (10,851). It has the district's fastest growth rate, particularly in North Richmond where the population has grown by 23% since 1996.

The second-largest area of growth is in the Waimea/Moutere Ward. Mapua has posted the highest growth - 27.4% between 1996 and 2001.

Although Tasman has recorded strong growth, the region has a low population density. As at March 2001, there were an estimated 4.3 people per square kilometre. This is mainly due to the lack of large urban areas and 58% of the area constituting lands covered by national parks.

People of European ancestry make up 91.3% of the Tasman population, significantly higher than the 74% for New Zealand overall.

All content from Kiddle encyclopedia articles (including the article images and facts) can be freely used under Attribution-ShareAlike license, unless stated otherwise. Cite this article:
Tasman District Facts for Kids. Kiddle Encyclopedia.