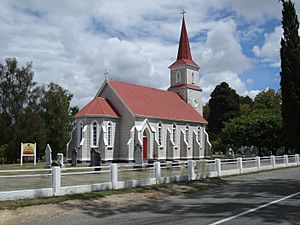 Upper Moutere (originally called Sarau by its founding German settlers) is a locality in the Tasman District near Nelson at the top of New Zealand's South Island.

As early as 1839 the New Zealand Company had resolved to "take steps to procure German emigrants" and appointed a Mr Bockelman as agent of the Company in Bremen. In September 1841 the Company made an agreement in principle to sell the Chatham Islands to the Hamburg-based Deutsche Colonisation-Gesellschaft, but the British Government thwarted this move. However, Lord Stanley, then the British Secretary of State for War and the Colonies, did agree to make the German colonists instant British subjects upon arrival in Nelson after being vetted in Hamburg first.

Most of the 140 German immigrants who arrived on the ship Sankt Pauli in 1843 and formed the nucleus of the villages of Sarau (now known as Upper Moutere) and Neudorf were Lutheran Protestants with a small number of Bavarian Catholics. The trip had lasted 176 days, during which time four young children had perished, seven couples had been joined in Holy Matrimony, one baby had been born and two passengers had jumped ship at a re-provisioning harbour.

After a brief initial period of prosperity the inherent problems of lack of land and capital caught up with the Nelson settlements and they entered a prolonged period of relative depression. Organised immigration ceased until the 1850s and labourers had to accept a cut in their wages by one third. By the end of 1843 artisans and labourers began leaving Nelson and by 1846 a quarter of the immigrants had moved away.

Charles Kelling was in charge of the second German immigration ship to the Nelson region, the Skjold, which arrived in 1844. He moved to Sarau after first having established the village of Ranzau with his brother Fedor. Charles Kelling became a community leader in Sarau. He represented the Moutere (1862–1869) and then the Waimea West (1869–1873) electorates on the Nelson Provincial Council.

Sarau was renamed Upper Moutere as a result of the anti-German feeling aroused by the First World War.

As of 2013[update] Upper Moutere continues to thrive and to attract new immigrants from Germany, the British Isles and the Netherlands.

All content from Kiddle encyclopedia articles (including the article images and facts) can be freely used under Attribution-ShareAlike license, unless stated otherwise. Cite this article:
Upper Moutere Facts for Kids. Kiddle Encyclopedia.