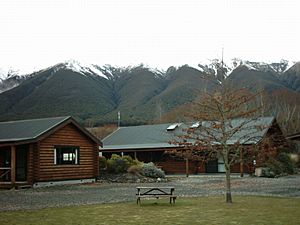 Saint Arnaud (previously Rotoiti) is a small alpine village located in the north of New Zealand's South Island, west of the mountains of the Saint Arnaud Range and 90 kilometres southwest of Nelson near the historic Tophouse Settlement. It is situated at the northern end of Lake Rotoiti.

The village was called Rotoiti until 1921, when it was renamed by the Department of Lands and Survey to avoid confusion with other communities of the same name. Archives show that between 1921 and 1951 both names were unofficially used by local residents and government agencies when referring to the village area.

Such references include a letter dated 1 June 1950 from the Chief Surveyor of the Nelson District Office of the Department of Lands and Survey to the New Zealand Geographic Board stating that "for many years confusion has occurred due to correspondence addressed to the residents and visitors at Lake Rotoiti in the Nelson Land District going to Lake Rotoiti, near Rotorua, in the Auckland Land District. Due to the same confusion of names, the Town of Rotoiti in the Nelson Land District was altered to Town of St. Arnaud by this Department." However, the name St. Arnaud did not receive legal approval until it was gazetted on 19 July 1951. Some locals were opposed to this change, as shown by a 4 December 1950 petition held by the New Zealand Geographic Board opposing the name change. Some local residents today still give their address as Lake Rotoiti, even with St. Arnaud as the official name.

A proposal with the New Zealand Geographic Board to either change the village's name back to its original name of Rotoiti or to use a dual name (a relatively common practice in New Zealand), failed in 2007. A survey had originally indicated that just over half of the area residents supported a return to the original name.

Mostly catering for a small number of locals and tramping and skiing tourists, the centre of Saint Arnaud has a village store with postal services, a petrol station, a cafe-restaurant, camping facilities, motels, chalets and specialist accommodation for trampers at the Travers-Sabine Lodge youth hostel. A water taxi service operates from a jetty at the northern end of Lake Rotoiti, near to a DOC campsite at Kerr Bay. There is another campsite at West Bay. A daily shuttle bus service along State Highway 63 provides connections to Nelson, Murchison, Greymouth, Blenheim, Westport and Picton.

The Royal New Zealand Air Force's field training base is nearby at Dip Flat.

The western part of the township includes a local Department of Conservation (DOC) Visitor Centre, with interactive displays and comprehensive information about the wildlife and environmental management of the Nelson Lakes National Park. The Centre has a team of professional staff who can offer detailed advice and guidance about all aspects of the area. A number of local footpaths, tracks and nature trails, suitable for all abilities, are maintained by the Department.

Saint Arnaud is a starting point for the strenuous 80 km Travers - Sabine tramping circuit. This follows the valley of the Travers River, ascends over the sub-alpine Travers Saddle, the watershed, and then descends the Sabine River valley and gorge to Lake Rotoroa. From here walkers can complete the circuit back to Saint Arnaud by either crossing a low saddle to the valley of Lake Rotoiti, via the Speargrass Track, or by ascending a higher route via Mount Angelus. Alternatively, they can take a water taxi from the DOC Sabine Hut on Lake Rotoroa up to the northern end of the lake.

In winter, snow sports take place primarily at Rainbow Skifield on the eastern side of the Saint Arnaud Range. Other local recreational activities include fishing, hunting, kayaking, small boat sailing, and gliding.

All content from Kiddle encyclopedia articles (including the article images and facts) can be freely used under Attribution-ShareAlike license, unless stated otherwise. Cite this article:
Saint Arnaud, New Zealand Facts for Kids. Kiddle Encyclopedia.