The Buller River is a river in the South Island of New Zealand. One of the country's longest rivers, it flows for 170 kilometres (110 mi) from Lake Rotoiti through the Buller Gorge and into the Tasman Sea near the town of Westport. As Rotoiti itself is fed by the Travers River it can be claimed that the Buller's source is at the headwaters of the Travers, on the northern slopes of Mount Travers in the Saint Arnaud Range. The Paparoa Range separates the Buller River from the Grey River. A number of flora and fauna are found in the Buller catchment, many of these extending onto the slopes of the Paparoa Range.

The river is named after Charles Buller, Member of Parliament in the United Kingdom of Great Britain and Ireland (UK) and director of the New Zealand Company, a UK-based company in the early 1800s with a royal charter supporting colonization efforts of New Zealand. The original Māori name for the Buller, Kawatiri, is rarely used.

The Buller River upstream from Murchison along with the Mangles River are popular for whitewater kayaking and recreational fishing. State Highway 6 follows the river for much of its length. 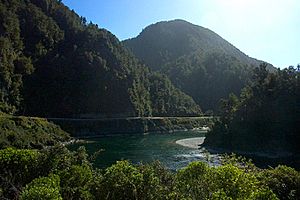 The Buller has several major tributaries. These include (in order from Lake Rotoiti) the Gowan River, the Matakitaki River, the Maruia River, and the Inangahua River. Other smaller tributaries include the Hope, Owen, Mangles, Matiri, Blackwater, Ohikaiti River, and Ohikanui River.

In July 2001 the Buller Water Conservation Order came into force, listing the waters of the Buller River and tributaries that are to be retained in their natural state or protected because of the outstanding characteristics, features and values of the waters.

All content from Kiddle encyclopedia articles (including the article images and facts) can be freely used under Attribution-ShareAlike license, unless stated otherwise. Cite this article:
Buller River Facts for Kids. Kiddle Encyclopedia.