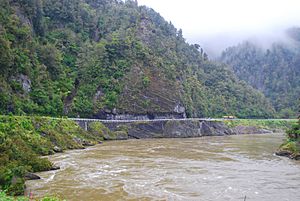 New Zealand's longest swingbridge at 110 metres (360 ft) in length spans the Buller River 14 kilometres (9 mi) west of Murchison. That area also offers rides on a zip-line across the gorge as well as several short bush walks.

The gorge and river both take their name from Charles Buller, Member of Parliament in the United Kingdom of Great Britain and Ireland (UK) and director of the New Zealand Company, a UK-based company in the early 1800s with a royal charter supporting colonization efforts of New Zealand.

All content from Kiddle encyclopedia articles (including the article images and facts) can be freely used under Attribution-ShareAlike license, unless stated otherwise. Cite this article:
Buller Gorge Facts for Kids. Kiddle Encyclopedia.