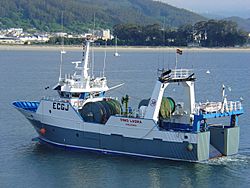 Another kind of trawling is midwater trawling (also known as pelagic trawling). This is where a net is towed higher in the water column. Midwater trawling catches pelagic fish such as anchovies, tuna, and mackerel. Bottom trawling catches both bottom-living fish. It also catches semi-pelagic species such as cod, squid, shrimp, and rockfish. Trawling is done by a trawler. This can be a small open boat or a large factory trawler. 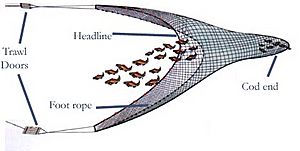 The trawl doors disturb the sea bed. They create a cloud of muddy water which hides the oncoming trawl net. It also makes a noise which attracts fish. The fish begin to swim in front of the net mouth. As the trawl continues along the seabed, fish begin to tire and slip backwards into the net. Finally, the fish become exhausted and drop back, into the net and are caught. The speed that the trawl is towed at depends on the swimming speed of the species which is being targeted. It also depends on the gear that is being used. For most species, a speed of around 4 knots (7 km/h) is appropriate. Trawling is very easy way of catching large amounts of fish. But it has been compared to "fishing with bulldozers". Like a bulldozer it scrapes up everything on the bottom.

Bottom trawling has operated for over a century on heavily fished areas like the North Sea and Grand Banks. overfishing has long been seen as causing major ecological changes to the fish species on the Grand Banks. Lately there is concern about the damage which benthic trawling does to the seabed. A species of particular concern is the slow-growing, deep water coral Lophelia pertusa. This species is home to a large community of deep sea organisms. It is easily damaged by fishing gear. On November 17, 2004 the United Nations General Assembly urged nations to consider temporary bans on high seas bottom trawling. Bottom trawling has been blamed for reducing the populations of many of fish species. These include species such as orange roughy, barndoor skate, shark, and many others.

All content from Kiddle encyclopedia articles (including the article images and facts) can be freely used under Attribution-ShareAlike license, unless stated otherwise. Cite this article:
Bottom trawling Facts for Kids. Kiddle Encyclopedia.