Darfield is a town in the Selwyn District of the South Island of New Zealand. It is 35 kilometres west of the outskirts of Christchurch. Its population is 2,960 as of June 2020.

Darfield is the main town between Christchurch and the West Coast region. It is often called "The township under the nor'west arch" in reference to a characteristic weather phenomenon that often creates an arch of cloud in an otherwise clear sky to the west of the township. This is caused by the condensation of water particles channelled upwards over the Southern Alps / Kā Tiritiri o te Moana.

Darfield lies in the Malvern district's arable and pastoral farming area. It is a gateway to the scenic Waimakariri and Rakaia rivers and the Southern Alps, and is also a popular lift-off place for hot air ballooning.

Darfield is located around the former junction of the railway lines coming from Christchurch and going to Whitecliffs (where coal was mined) and Springfield and on to the West Coast.

The proportion of people born overseas was 16.3%, compared with 27.1% nationally.

Darfield has numerous kindergartens. The original Darfield school was opened in 1883 with a total of 18 students attending. by 1902 the school had two teachers and ninety-three students children on the school roll.

Darfield Primary School is Darfield's sole primary school, catering for years 1 to 6. It has 196 students.

Darfield High School is Darfield's sole intermediate/highschool, catering for years 7 to 13. It has 843 students. The school was established in 1951 as a secondary school, and expanded to cover intermediate students in 1978.

Both schools are coeducational. Rolls are as of July 2016. 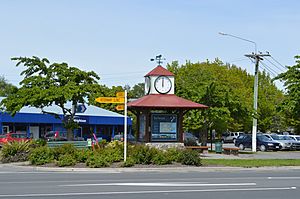 Darfield is serviced with the 86 bus route, a morning and evening express route that connects the town with Central Christchurch, via Kirwee, West Melton and Yaldhurst.

Darfield is served by the Midland railway line. The TranzAlpine train stops twice daily (request only); en route to the West Coast and on its return trip back to Christchurch.

All content from Kiddle encyclopedia articles (including the article images and facts) can be freely used under Attribution-ShareAlike license, unless stated otherwise. Cite this article:
Darfield, New Zealand Facts for Kids. Kiddle Encyclopedia.