Express passenger trains on the South Island Main Trunk were some of the last services to be hauled by steam locomotives in New Zealand. These services, especially in the late 19th century and early 20th century, were the flagships of the passenger network and received the newest and best motive power and rolling stock. In the mid-20th century, these expresses were augmented by evening railcars between Christchurch and Dunedin. 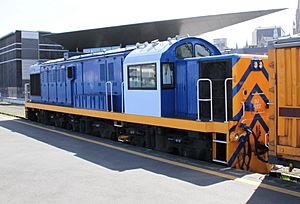 By the late 1960s steam locomotives had been phased-out from the North Island, and a serious effort was being made to replace steam locomotives with diesel-electric locomotives in the South Island. The introduction of the DJ class in 1968 sealed the fate of steam, and on May 1969 plans were announced to introduce a premier diesel-hauled express to replace the South Island Limited between Christchurch, Dunedin, and Invercargill. Named the Southerner, it would be hauled by members of the DJ class, and unlike the steam-hauled expresses, it would not carry mail. It began service on 1 December 1970.

The business model behind the Southerner was a limited-stop service, halting only at major towns, with feeder bus services to smaller towns that had been bypassed. The reintroduction of buffet carriages, the first time since the removal of dining carriages in the 1930s as an economy measure also eliminated the refreshment stops which added time and inconvenience to the journey. The Southerner was a single-class train using former first-class carriages. As a result, all passengers enjoyed wide reclining seats arranged two-and-one; significantly greater comfort than other rail or bus options provided at the time.

Despite the introduction of the Southerner, steam-hauled expresses continued to operate on Friday and Sunday evenings for almost 11 months; the last running on 26 October 1971. This was the last steam-hauled, regularly-scheduled revenue service in New Zealand. The service was replaced with a diesel-hauled train, which continued until 1979. The evening railcars lasted a few years longer, but the age of the Vulcan railcars was becoming increasingly obvious and the service was cancelled in April 1976 without replacement. After 1979, the Southerner was the only long-distance passenger service on the South Island Main Trunk.

A pressure-ventilated former composite first-class (14 seats) and second-class (28 seats) carriage and the only 56-ft car to serve in a Vice-Regal capacity for a Governor-General as a kitchen carriage for the 1934-built North Island Vice Regal car (hence the unique design) were rebuilt as full buffet carriages, incorporating full-length counters and 20 swivel stools. In 1973, a former double-toilet (later designated a North Island Main Trunk railway first-class car) was rebuilt as a third buffet car. Two carriages retained their "coupe" compartment for train staff (one car for each train) and one car in each train retained its compartment for hostesses.

The buffet carriages were fitted with new Japanese bogies of Kinki-Sharyo manufacture to ensure a smooth ride. Compared to the Timken spring bogies under the other carriages and vans, they offered a superior-quality ride; passengers had complained about the riding quality of the other carriages. The bucket seats were reupholstered in teal-blue vinyl.

With the success of new Korean bogies underneath Northerner carriages, the Southerner carriages were also fitted with this type of bogie. Work on car underframes was less substantial than that carried out on the Northerner.

In the 1980s, NZR Addington Workshops designed a new seat and these had proven successful in Picton/Greymouth carriages, so the Southerner carriages received these seats also, increasing seating capacity from 29 or 33 to 45 or 50 per car.

Once new seats were installed, one 45-seat car with staff compartment and one 50-seat car without were sent to the North Island for use on the two Gisborne Express sets. In their place on the Southerner were two 32-seat Endeavour carriages.

With delays in the overhaul and refurbishment of all the InterCity Rail stock, the Southerner suffered most. From late 1987, with the Northerner requiring replacement stock, eight carriages from the Southerner were refurbished for the task. This resulted in the remaining three Southerner carriages, carriages from the Picton and Greymouth pool and two former Picton and Greymouth carriages that were heavily refurbished and overhauled for the new TranzAlpine Express keeping the services running, and also saw the standard of service drop considerably. The three full buffet carriages were still utilised. The two TranzAlpine carriages had their Addington seat numbers reduced from 52 to 50. The seats were reupholstered and modified before being reinstalled and were re-arranged into bays of four, alcove-style, around tables. These two carriages, still retaining their small windows, were permanently allocated to the Southerner when the TranzAlpine was made an all-panorama train.

At the same time, the InterCity refurbishment programme started, a private tourist firm leased a Southerner carriage and marketed it as The Connoisseur car. It was thoroughly overhauled and refurbished, and offered users a more upmarket service.

In 1988, three more red Picton and Greymouth carriages and an Endeavour car were refurbished for the Southerner, entering service Monday, 4 July 1988, joining the two carriages already fitted as such. The Endeavour car and one Picton/Greymouth car were fitted out as servery carriages, each seating 31, alcove-style, in bays of four. The other two carriages seated 50, alcove-style. The seats were reupholstered and new carpet laid in all four carriages. Two FM class guard's vans were equipped with 11 kW generators at their handbrake ends and became power-baggage vans for the "new" trains. Its reintroduction also saw the cessation of parcels traffic on the trains.

This seating arrangement, while accepted on the TranzAlpine, Coastal Pacific, and Bay Expresses, proved unsuccessful on the Southerner, so one car from each set had seating re-arranged to a forward-facing layout.

On 27 August 1993, a former Wairarapa Connection car turned NIMT servery car was brought in to replace the servery car damaged in the Rolleston accident two days earlier (see below), along with three refurbished Auckland excursion carriages and their 37.5 kW FM van and the first of the two Bay Express panorama carriages was also allocated to the train as the initial attempt to re-equip it with panorama carriages.

In September 1995, five of the first batch of 11 non-air-conditioned panorama carriages were thoroughly overhauled, air-conditioning and a new-style seat (as in the third three-car Northerner and Overlander set) were installed. Two of these were permanently allocated to the Southerner, the second two temporarily, with the fifth juggling duties between Invercargill, Greymouth and Picton. The two original servery/observation carriages were similarly refurbished. The third TranzAlpine/Coastal Pacific and the first of the two Southerner 11 kW power/baggage vans were fitted with newer, more powerful generators (though less powerful than their NIMT counterparts) and the Southerner van had its public viewing module re-enclosed for luggage carriage again. Later that year, when the Bay Express was re-equipped with two of those seven refurbished carriages, the original two Bay Express carriages were similarly refurbished and permanently allocated to the Southerner.

After air-conditioned panorama carriages were introduced, the train's popularity increased to the extent that Tranz Scenic introduced extra Christchurch-Dunedin, Invercargill-Christchurch, Christchurch-Invercargill and Dunedin-Christchurch services on Fridays, numbered #903 to #906. These were short-lived, ceasing after the 1996 Hilderthorpe, North Otago level-crossing accident.

The advantages of the new technology and the removal of delays caused by the carriage of mail, and the elimination of refreshment stops became apparent instantly, with the travel time between Christchurch and Dunedin cut by almost an hour from 7 hours 9 minutes to 6 hours 14 minutes. Initially, the service stopped at only a small number of stations along the Main South Line – Gore, Balclutha, Dunedin, Oamaru, Timaru and Ashburton, with feeder bus services for passengers travelling to other destinations. Gradually, additional stops were added, although a number were "stops on request" only.

Typically, two DJ class diesel locomotives hauled the train, and when a third was added to increase power on the rugged, difficult line between Oamaru and Dunedin, another 19 minutes were cut from the schedule.

The Southerner was notable for being the first train on New Zealand Railways to include a full dining service since the abolition of dining carriages as an economy measure in World War I. The Southerner had a full-service buffet car with 20 seats that served hot meals and cafeteria-style food, replaced in the early 1990s with a buffet bar service for passengers to purchase food to be consumed at their seats.

By the 1990s, the DJ class had been largely withdrawn and other locomotives hauled the Southerner, including the DC and DX classes.

The service ran at a loss and had been supported by government subsidies until these were abolished for all long-distance passenger trains in 1989. New Zealand Rail changed the seating configuration by replacing the very generous three-abreast configuration with a more standard four-abreast, with reduced (but still generous compared to bus) seat pitch. The full-service buffet car was replaced with a buffet servery. Both measures reduced costs significantly, but the service was challenged by the increasing number of low-cost shuttle bus services, particularly between Christchurch and Dunedin, which were significantly cheaper than the train. Nonetheless, the Southerner still operated seven days a week, one service each way.

As branch lines were nearly non-existent (and with those still in use not open to passenger train) and as Dunedin's suburban passenger services had been withdrawn by 1982, it was the sole regular train to stop at the famous Dunedin Railway Station, once the country's busiest. At this time, the typical consist comprised only two or three carriages and a power/luggage van, and the southbound journey from Christchurch and Dunedin was timetabled to take 5 hours 46 minutes, with an additional 3 hours 19 minutes to reach Invercargill. Northbound, the journey from Invercargill to Dunedin was scheduled at 3 hours 28 minutes, with another 5 hours 27 minutes to Christchurch.

It continued to face increased bus competition, and with increased car ownership and competition in the airline industry, the Southerner seemed unable to find a profitable niche.

In 2001, Tranz Rail sold a 50% share in long-distance passenger services operated by Tranz Scenic to directors of Australian company West Coast Railway, but the company elected not to purchase the Southerner without the promise of a subsidy. The Ministry of Economic Development funded a feasibility study into the economic impact of subsidising the Southerner, but this failed to demonstrate a viable business case for the service; patronage having fallen to an average of between 40 and 50 people per day in each direction. This was roughly half what was necessary to make the train viable. As neither airline nor bus services along the route were subsidised, the government decided not to subsidise the train and its demise was inevitable.

With the rising demand for travel, especially to and from Invercargill, there has been of talk of reinstating the Southerner on an Invercargill-Dunedin-Invercargill daily rotation. With Otago University and Southern Institute of Technology encouraging studies between the two campuses, students would benefit if enough interest was generated. KiwiRail has stated that it has no interest in the services but said a private operator would be assisted if an attempt was made to operate the route.

In December 2016 KiwiRail announced that it was considering establishing a temporary Southerner-style service using scenic carriages from the Coastal Pacific, whilst that service remained suspended following the large Kaikoura earthquake. An alternative rolling stock option would be to use one of the three Silver Fern railcars owned by KiwiRail once the Coastal Pacific service resumes.

In June 2017 the government made a grant of $50,000 to evaluate the business case for reinstating the Southerner.

Despite this revived interest, the service did not return and there are now discussions around chartered services for pop concerts.

All content from Kiddle encyclopedia articles (including the article images and facts) can be freely used under Attribution-ShareAlike license, unless stated otherwise. Cite this article:
Southerner (New Zealand train) Facts for Kids. Kiddle Encyclopedia.