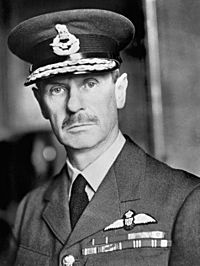 Hugh Dowding (24 April 1882 – 15 February 1970) was a British officer in the Royal Air Force during World War II. He was the commander of RAF Fighter Command during the Battle of Britain. He played a very important role in Britain's defence, and hence, the defeat of Hitler's plan to invade Britain.

All content from Kiddle encyclopedia articles (including the article images and facts) can be freely used under Attribution-ShareAlike license, unless stated otherwise. Cite this article:
Hugh Dowding Facts for Kids. Kiddle Encyclopedia.