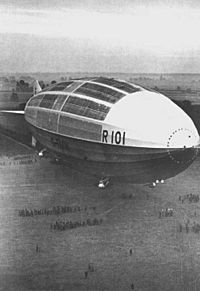 English socialist government of the time had planned to build airships for the imperial route London-Cairo-Bombay-Canada-Australia-New York-London.

It was an ambitious project that allowed save travel time by sea, also competed with Germany and the Graf Zeppelin airship supremacy.

All content from Kiddle encyclopedia articles (including the article images and facts) can be freely used under Attribution-ShareAlike license, unless stated otherwise. Cite this article:
R101 Facts for Kids. Kiddle Encyclopedia.