The Junkers Ju 88 was a German World War II Luftwaffe twin-engined multirole combat aircraft. Junkers Flugzeug- und Motorenwerke (JFM) designed the plane in the mid-1930s as a so-called Schnellbomber (fast bomber) that would be too fast for fighters of its era to intercept. It suffered from a number of technical problems during its development and early operational periods but became one of the most versatile combat aircraft of the war.

Like a number of other Luftwaffe bombers, it served as a bomber, dive bomber, night fighter, torpedo bomber, reconnaissance aircraft, heavy fighter and at the end of the war, as a flying bomb.

Despite protracted development, it became one of the Luftwaffe's most important aircraft. The assembly line ran constantly from 1936 to 1945 and more than 16,000 Ju 88s were built in dozens of variants, more than any other twin-engine German aircraft of the period. Throughout production the basic structure of the aircraft remained unchanged. 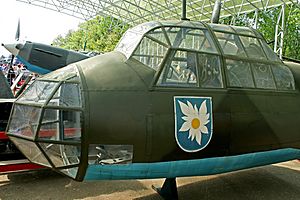 In August 1935, the German Ministry of Aviation submitted its requirements for an unarmed, three-seat, high-speed bomber with a payload of 800–1,000 kg (1,760–2,200 lb). Design of the Ju-88 began with a study which evolved into two parallel designs, Ju-85 and Ju-88. The Ju 85 was a twin-engined bomber aircraft prototype, designed by Junkers in 1935. The Ministry of Aviation requested the aircraft, which differed from the Ju 88 due to the use of a twin fin tail unit. The aircraft was never put into service.

The aircraft's first flight was made by the prototype Ju 88 V1, which bore the civil registration D-AQEN, on 21 December 1936. When it first flew, it managed about 580 km/h (360 mph) and Hermann Göring, head of the Luftwaffe was ecstatic. It was an aircraft that could finally fulfill the promise of the Schnellbomber, a high-speed bomber.

Production was delayed drastically by developmental problems. Although planned for a service introduction in 1938, the Ju 88 finally entered squadron service (with only 12 aircraft) on the first day of the invasion of Poland in 1939. Production was painfully slow, with only one Ju 88 manufactured per week, as problems continually kept cropping up. The Ju 88C series of heavy fighter was also designed very early in 1940, but kept secret from Göring, as he only wanted bombers.

All content from Kiddle encyclopedia articles (including the article images and facts) can be freely used under Attribution-ShareAlike license, unless stated otherwise. Cite this article:
Junkers Ju 88 Facts for Kids. Kiddle Encyclopedia.