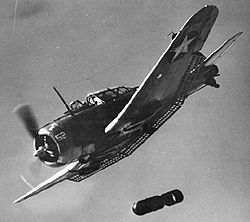 An SBD Dauntless, a dive bomber from World War II, drops a bomb

A dive bomber is a bomber aircraft that dives towards the ground so it can get very close to its targets so that it is more likely to hit them. This can also limit the chance of anti-aircraft fire hitting the plane.

Diving nearly vertically at the target, the aircraft will release the bombs very close to the target at high speed. This allows a dive bomber to drop bombs accurately on a relatively small target, or a moving target quite easily. Dive bombers were widely used to attack high value targets such as ships and bridges. This also had the advantage of attacking ships at a weak spot. A ship's armour was heaviest near the water. On the top of the ship, however, either the armour was very thin, or there was no armour at all. Also, dive bombing allowed relatively small aeroplanes carrying a limited bomb load to do more damage than usual.

Because of better bombsights and better anti-aircraft warfare after World War II, dive bombers were replaced by attack aircraft.

All content from Kiddle encyclopedia articles (including the article images and facts) can be freely used under Attribution-ShareAlike license, unless stated otherwise. Cite this article:
Dive bomber Facts for Kids. Kiddle Encyclopedia.