The Lamborghini Countach is a sports car. Lamborghini built it from from 1974 to 1990. The Countach came after the Miura. Gruppo Bertone designed the Countach. The car used several different V12 engines by the time Lamborghini stopped making it in 1990. 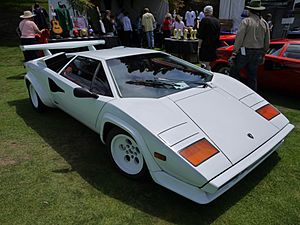 Lamborghini made several different Countach models between 1974 and 1990.

The table below shows the performance of the various Countach models.

All content from Kiddle encyclopedia articles (including the article images and facts) can be freely used under Attribution-ShareAlike license, unless stated otherwise. Cite this article:
Lamborghini Countach Facts for Kids. Kiddle Encyclopedia.