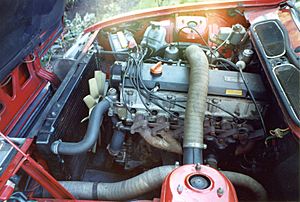 Longitudinal inline 6 in a Rover 2300

A longitudinal engine is an engine mounted in a vehicle so that the engine's crankshaft is parallel with the vehicle, front to back. The majority of rear wheel drive vehicles use a longitudinal engine design. where the engine's crankshaft axis is parallel to the vehicle. Many modern front wheel drive vehicles use a transverse engine mounting design.

Engines may be placed in three main positions within the car:

All content from Kiddle encyclopedia articles (including the article images and facts) can be freely used under Attribution-ShareAlike license, unless stated otherwise. Cite this article:
Longitudinal engine Facts for Kids. Kiddle Encyclopedia.