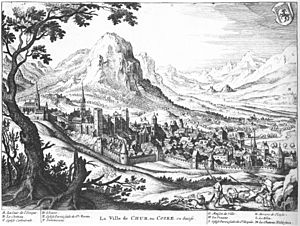 Chur or Coire is the capital city of the caton of Graubünden (also called Grisons). About 34.000 people live in the city, which is probably the oldest in Switzerland. The city is located on the Rhine.

The name "chur" derives perhaps from the Celtic kora or koria, meaning "tribe", or from the Latin curia

Archaeological evidence of settlement at the site goes back as far as the Pfyn culture (3900-3500 BC), Various artefacts from the Bronze Age and Iron Age have been found in the city. The Roman Catholic Diocese of Chur was created in the 4th century. It is probably the first Roman Catholic diocese to be created north of the Alps.

All content from Kiddle encyclopedia articles (including the article images and facts) can be freely used under Attribution-ShareAlike license, unless stated otherwise. Cite this article:
Chur Facts for Kids. Kiddle Encyclopedia.