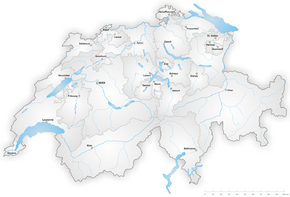 This is a list of places in Switzerland having standing links to local communities in other countries. In many cases, these completely ceremonial associations, especially when formalized by the local governments, are called by the fallacious name of "town twinning" – though other terms, such as "sister city" and "partner town" are far more accurate. While most of the places included in this list are cities or towns, the list also contains villages, districts, counties, cantons, provinces, etc. with similar links.

Geneva does intentionally not have any particular "sister" tie with any city in the world. It declares itself related to the entire world.

All content from Kiddle encyclopedia articles (including the article images and facts) can be freely used under Attribution-ShareAlike license, unless stated otherwise. Cite this article:
List of twin towns and sister cities in Switzerland Facts for Kids. Kiddle Encyclopedia.