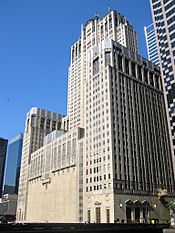 Exterior of the Civic Opera House

The Civic Opera House is an opera house located at 20 North Wacker Drive in Chicago. It is part of a building which contains a 45-story office tower and two 22-story wings, known as the Civic Opera Building. This structure opened on November 4, 1929 and has an Art Deco interior.

The Civic Opera House has 3,563 seats, making it the second-largest opera auditorium in North America. Built for the Chicago Civic Opera, today it is the permanent home of the Lyric Opera of Chicago.

All content from Kiddle encyclopedia articles (including the article images and facts) can be freely used under Attribution-ShareAlike license, unless stated otherwise. Cite this article:
Civic Opera House (Chicago) Facts for Kids. Kiddle Encyclopedia.