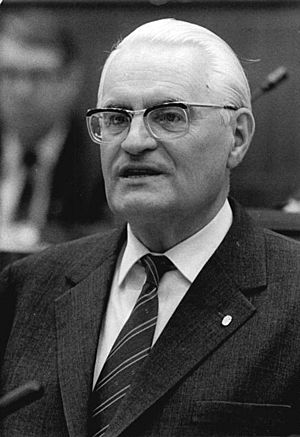 Götting was born in Nietleben, Province of Saxony, now part of Halle, Saxony-Anhalt. During World War II, he served in the Reichsarbeitsdienst and later in the Wehrmacht. He was briefly held as a prisoner of war by U.S. forces in 1945.

All content from Kiddle encyclopedia articles (including the article images and facts) can be freely used under Attribution-ShareAlike license, unless stated otherwise. Cite this article:
Gerald Götting Facts for Kids. Kiddle Encyclopedia.