The hotel was opened in 1963 by Gene Autry as Gene Autry's Hotel Continental. Sold to Hyatt Hotels Corporation in 1966, it was renamed the Continental Hyatt House.

In the late 1960s and 1970s the hotel's proximity to popular clubs such as the Whisky a Go Go made it the preferred Los Angeles accommodation for touring rock groups, notably English bands Led Zeppelin, The Who and the Rolling Stones. It was often referred to at the time as the Riot House, a play on the name Hyatt House. 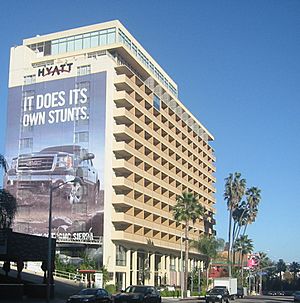 Hyatt West Hollywood hotel in 2006 prior to renovation

In 1976 the hotel became the Hyatt on Sunset. In February 1997, the hotel was renamed the Hyatt West Hollywood. The hotel was renovated in 2008 and reopened on January 8, 2009 as the Andaz West Hollywood, the second Andaz hotel in the new brand by Hyatt Hotels and Resorts. The 14-story Andaz West Hollywood has 239 rooms, including 20 suites and a restaurant called RH. The renovation was completed by New York-based architecture and interior design firm Janson Goldstein LLP and includes a hand-painted metal disk 11-foot sculpture by renowned New York-based artist Jacob Hashimoto. The balconies made famous by stories of rock stars throwing televisions from them are now glass-enclosed sunrooms that overlook Sunset Boulevard.

All content from Kiddle encyclopedia articles (including the article images and facts) can be freely used under Attribution-ShareAlike license, unless stated otherwise. Cite this article:
Andaz West Hollywood Facts for Kids. Kiddle Encyclopedia.