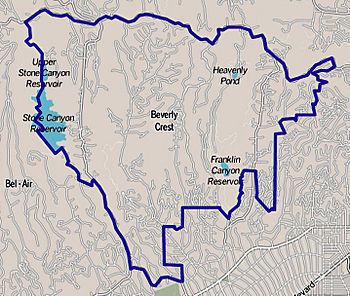 Beverly Crest is a neighborhood in the Santa Monica Mountains, in the Westside area of the city of Los Angeles, California. The 'north of Sunset' section of the Holmby Hills neighborhood is within Beverly Crest.

According to demographic surveys, the median age of residents is 45 years old, which makes Beverly Crest have one of the highest median ages for any of the neighborhoods in Los Angeles, behind only Century City and Bel-Air.

The 2000 U.S. census counted 10,852 residents in the 8.24-square-mile Beverly Crest neighborhood—or 1,318 people per square mile, among the lowest population densities for the city and the county. In 2008, the city estimated that the population had increased to 11,569. In 2000 the median age for residents was 45, which was high for city and county neighborhoods. The percentages of residents aged 35 and older were among the county's highest.

The neighborhood was considered "not especially diverse" ethnically within Los Angeles, with a relatively high percentage of Caucasian residents. The breakdown was whites, 87.5%; Asians, 4.0%; Latinos, 3.4%; blacks 1.7%; other races 3.3%. Iran (28.6%) and the United Kingdom (8.6%) were the most common places of birth for the 25% of the residents who were born abroad—which was an average percentage for Los Angeles as a whole.

The median yearly household income in 2008 dollars was $169,282, considered high for the city and the county. Renters occupied 10% of the housing stock, and house- or apartment-owners held 90%. The average household size of 2.4 people was considered typical for Los Angeles. The 5.6% of families headed by single parents was low for city and county neighborhoods. The percentages of married people in Bel Air were among the county's highest—63.4% for men and 59.5% for women. There were 896 veterans, or 10.2% of the population, a high proportion compared to the rest of the city and county.

The area of Beverly Crest is roughly triangular, with Sherman Oaks to the north, Bel Air to the southwest and the city of Beverly Hills to the southeast. The borders are mapped by the Los Angeles Times to run along Mulholland Drive on the north; Stone Canyon Road to the west, then Beverly Glen Boulevard below Stone Canyon Reservoir to Sunset Boulevard on the far south. The southeastern boundary with Beverly Hills is complex, and most of Beverly Crest lies within the so-called Beverly Hills Post Office, defined as ZIP code 90210 outside the city of Beverly Hills proper. The neighborhood of Hollywood Hills West is nearby on the east. By this definition, Beverly Crest includes Benedict Canyon, Franklin Canyon and Coldwater Canyon. Eastern portions of the Santa Monica Mountains National Recreation Area lie in this area.

All content from Kiddle encyclopedia articles (including the article images and facts) can be freely used under Attribution-ShareAlike license, unless stated otherwise. Cite this article:
Beverly Crest, Los Angeles Facts for Kids. Kiddle Encyclopedia.