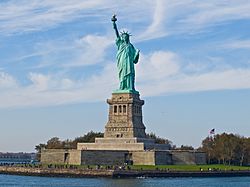 For many immigrants, the Statue of Liberty was their first view of the United States, signifying new opportunities in life. The statue is an iconic symbol of the American Dream

The American Dream is a national ethos of the United States, the set of ideals (democracy, rights, liberty, opportunity and equality) in which freedom includes the opportunity for prosperity and success, as well as an upward social mobility for the family and children, achieved through hard work in a society with few barriers.

In the definition of the American Dream by James Truslow Adams in 1931 it states: "life should be better and richer and fuller for everyone, with opportunity for each according to ability or achievement regardless of social class or circumstances of birth."

The American Dream is rooted in the Declaration of Independence, which proclaims that "all men are created equal" with the right to "life, liberty and the pursuit of happiness."

The Statue of Liberty officially named Liberty Enlightening the World, is a monument symbolizing the United States. The statue is placed near the entrance to New York City harbor.

Many migrants, people who come to America from other countries, come to America for the hope of a better life. America is attractive to migrants, because often there is more freedom to become rich or famous than the country that they leave. The standard icon of the American Dream is the Statue of Liberty.

The term American Dream also means to live freely and equally with all other people in the USA. 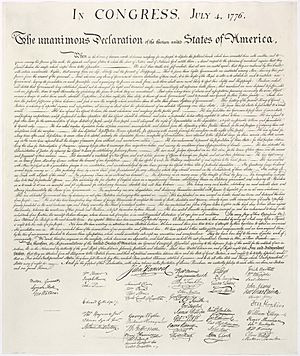 The American Dream is rooted in the Declaration of Independence

The meaning of the "American Dream" has changed over the course of history, and includes both personal components (such as home ownership and upward mobility) and a global vision. Historically the Dream originated in the mystique regarding frontier life.

As the Governor of Virginia noted in 1774: "for ever imagine the Lands further off are still better than those upon which they are already settled". He added that, "if they attained Paradise, they would move on if they heard of a better place farther west".

In the United States, home ownership is sometimes used as achieving the promised wealth; ownership has been a status symbol separating the middle classes from the poor.

Sometimes the Dream is identified with success in sports or how working class immigrants seek to join the American way of life.

All content from Kiddle encyclopedia articles (including the article images and facts) can be freely used under Attribution-ShareAlike license, unless stated otherwise. Cite this article:
American Dream Facts for Kids. Kiddle Encyclopedia.