Casula is a suburb of Sydney, in the state of New South Wales, Australia. It is 35 kilometres south-west of the Sydney central business district, in the local government area of the City of Liverpool.

Casula (is the first suburb immediately south of Liverpool on the Hume Highway and the Main Southern Railway between Sydney and Melbourne. Casula consists of undulating, gently rolling land, with elevations across the suburb being mostly between 30 and 70 metres above sea level. The Georges River forms the eastern boundary of the suburb, and its western bank is paralleled by a relatively steep escarpment.

The original inhabitants of the Casula area were the Tharawal or "Dharawal" people of the greater Eora nation. 'Tharawal' is the indigenous terminology that refers to the country and people who belong to Greater Southern and South-Western Sydney. The Tharawal Local Aboriginal Land Council (LALC) extends through Liverpool, Camden, Campbelltown and Wollondilly Local Government Areas (LGA's). The totem animal for Tharawal country is the superb lyrebird (Menura novaehollandiae).

Casula was first settled by agriculturalists in the nineteenth century, among them Richard Guise, who named his farm "Casula". The area became dominated by poultry farming, market gardening and fruit growing. Another notable farm was Glenfield Farm, which dates from circa 1817. Situated in Leacocks Lane, it originally belonged to Charles Throsby, a member of the Legislative Council and an explorer. The farm is the oldest continuously worked farm in Australia and is listed on the Register of the National Estate.

During the First World War, a large Australian Imperial Forces recruitment and training reserve was located in Casula - a fact reflected by the name of one of its major residential streets, "Reserve Road".

In 1918, Walter Ingham Sr. bought 42 acres (170,000 m2) of bush land in Casula as a gift to 18-year-old son, Walter. On his death in 1953, his sons Jack and Bob took over the small chicken breeding operation and built it into the largest producer of chickens and turkeys in Australia. Inghams Enterprises is now headquartered in Liverpool.

Casula Post Office opened on 1 February 1924 and closed in 1979. A Liverpool South office was renamed Cross Roads in 1964 and Casula Mall in 1990 and remains open.

Being heavily farmed, the area did not become suburbanised until the late 1950s. Much of the acreage in the central and southern portions were subdivided and developed over the next few decades but even now there are pockets of undeveloped land. 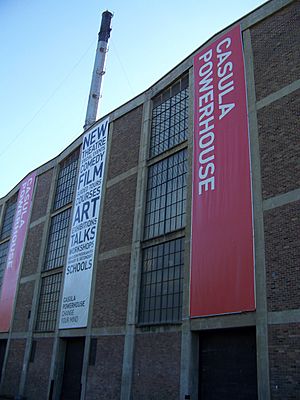 The Casula Powerhouse, which is situated next to Casula railway station, was a former 1950s power station. It reopened in 1994 as an arts centre housing many culturally diverse exhibitions from artists living in the South West Region of Sydney. Past projects includes Viet Nam Voices, Cybercultures, Shanghai Star, and Belonging. The centre closed in July 2006 to undergo significant renovations. The new centre opened on 5 April 2008 and counts a 326-seat theatre, new exhibition spaces, artist studios and residencies among its facilities.

Casula is bordered on the north and west by the M5 South Western Motorway, with continuous freeway-standard highway to central Sydney and the North Shore. The Hume Highway cuts through the centre of Casula.

Casula railway station is on the Airport, Inner West & South Line of the Sydney Trains network, but not all trains stop there. Relatively frequent bus services link Casula to the major commercial and retail centre of Liverpool and Liverpool railway station.

According to the 2011 census, Casula had a population of 14,696, which was substantially families. The number of single-person households 16.3% was well below the national average 24.3%, while the number of couples with children 56.9% was well above average 44.6%.

An annual athletic competition held for all persons who have resided in Casula. The winner of the 3 race series is awarded the Casula Cup. Previous winners include Geoff Wood and Michael Brewster.

All content from Kiddle encyclopedia articles (including the article images and facts) can be freely used under Attribution-ShareAlike license, unless stated otherwise. Cite this article:
Casula, New South Wales Facts for Kids. Kiddle Encyclopedia.