Kids Encyclopedia Facts
This page is about the suburb. For the waterway, see Wolli Creek.

Wolli Creek is a suburb in southern Sydney, in the state of New South Wales, Australia. It sits beside the Wolli Creek and Cooks River waterways. Wolli Creek is situated between the suburbs of Arncliffe and Tempe, 10 kilometres south of the Sydney central business district and is part of the St George area. Wolli Creek is in the local government area of Bayside Council.

Wolli Creek was named after the waterway on its northern border.

The suburb was previously part of Arncliffe. Reuben Hannam was granted land in 1825 on the banks of Cooks river. Alexander Brodie Spark purchased land in 1826 and built Tempe house in 1836. It was named after 'Vale of Tempe', a beautiful valley in ancient Greek legend set at the foot of Mount Olympus. Tempe House, designed by John Verge, has a Georgian feel and is regarded as one of the great houses of Sydney.

Philanthropist Caroline Chisholm leased Tempe House as a boarding school for young women (1863–1865). The estate was known as Greenbank during this time and presented an ideal location for Chisholm's work. She remarked on the spacious and lofty rooms and the 'fine large and open orchard of fruit trees, intersected by wide and shady walks'.

In 1884 the estate was sold to the Sisters of the Good Samaritan for use as a charitable refuge for women. The Sisters added the impressive St Magdalen's Chapel (1888), which is believed to be the work of Sheerin & Hennessy, an important firm of Sydney architects, who designed the Archbishop's Residence and St Patrick's College at Manly. The neo-Gothic style Chapel is of major cultural significance. It is now deconsecrated and has been restored as part of the Discovery Point redevelopment. Tempe House is now listed on the Register of the National Estate.

The area became predominantly industrial until a redevelopment was planned in the late 1990s. The new suburb was to be called North Arncliffe, but residents in the area petitioned the council to conduct a vote to select a better name. Wolli Creek was the most popular choice. Wolli Creek railway station opened in 2000. Wolli Creek was officially declared a suburb in 2002. 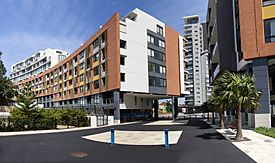 The Princes Highway links Wolli Creek north to Tempe and the Sydney CBD and south to Arncliffe and Rockdale. The M5 South Western Motorway, with entrances and exits at nearby Arncliffe, runs south-west towards Liverpool and north-east towards Botany and the city.

There are a few different bus routes in Wolli Creek. The 348 bus route stops outside Wolli Creek station, where it continues to Bondi Junction via Tempe, St Peters, Kensington, UNSW and Randwick. The 422 bus route stops outside Woolworths Wolli Creek, on the Princes Highway. This route goes to the City in one direction and to Kogarah in the other direction. There are also NightRide routes N10 and N11 which stop outside Woolworths Wolli Creek. Both routes operate hourly in both directions from midnight to about 4am with route N10 operating three trips per hour from the City on Friday, Saturday and Sunday nights.

Cahill Park is located along the Princes Highway and Gertrude Street, fronting the Cooks River. Facilities offered include playground equipment, electrical barbecues and sporting fields for cricket and rugby. Tennis courts are also located adjacent to Cahill Park. Discovery Point Park is a privately owned park, which is open to the public, located along the Princes Highway and Brodie Sparks Drive. Discovery Point Park offers over three hectares of landscaped waterfront parklands, with provisions for walking and cycling. Other recreation facilities include Kogarah Golf Course, located along Marsh Street and the St George Rowing Club, on Levey Street.

All content from Kiddle encyclopedia articles (including the article images and facts) can be freely used under Attribution-ShareAlike license, unless stated otherwise. Cite this article:
Wolli Creek, New South Wales Facts for Kids. Kiddle Encyclopedia.