Rhodes is an Inner West suburb of Sydney, in the state of New South Wales, Australia. Rhodes is located 12 kilometres west of the Sydney central business district, in the local government area of the City of Canada Bay. It was formerly part of Concord Municipality until a merger with Drummoyne Council to form Canada Bay in December 2000.

Rhodes sits on a peninsula between Bray Bay and Homebush Bay, on the southern bank of the Parramatta River and is located about 3 kilometres from Stadium Australia, Sydney Olympic Park, Sydney International Aquatic Centre, Bicentennial Park and Millennium Parklands.

The pedestrian, cyclist, transport and emergency services Bennelong Bridge from Rhodes to Wentworth Point opened in May 2016.

The western section, west of the railway line, features new developments on the former chemical and industrial sites, and includes: the Rhodes Waterside Shopping Centre; many new (2007) apartment blocks; and a public foreshore walkway with two small parks (one incomplete Jan 2010). This area was planned by the NSW Government under Sydney Regional Environment Plan No 29.

Rhodes was named after the home of an early resident, Thomas Walker (1791–1861), which was built on the north-eastern side of the peninsula. Walker named his property Rhodes after his grandmother's home, Rhodes Hall, in Leeds, England. The house was demolished in 1919, when the land was purchased by the John Darling Flour Mills, later owned by Allied Feeds Limited.

Industry invaded the once picturesque and heavily forested isthmus in 1911 when Messrs. G & C. Hoskins established a large foundry specialising in the manufacture of cast iron pipes for gas and city water reticulation purposes. In 1930 their operations moved to Port Kembla, and in 1935 the site was taken over by CSR. During the period from about 1930 to the mid-1980s, the western part of the suburb between Homebush Bay and the railway line was taken up by chemical manufacturing.

The former Tulloch Limited Phoenix Iron Works were located between the railway line and Concord Road, south of Mary Street. They gave their name to Tulloch Avenue and Phoenix Avenue. This is now the site of the Hewlett Packard offices in Sydney. Tullochs manufactured rolling stock for the New South Wales Government Railways.

In October 2010, the City of Canada Bay approved a plan which would allow up to 5 buildings of 25 storeys in this Western section. The expected population in this western section is over 11,000, making it one of the most densely populated areas of Sydney outside the CBD. There are no facilities for organised active recreation or school education within this area. 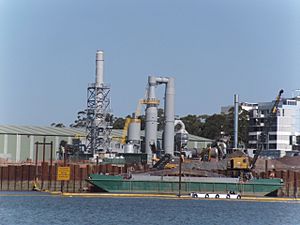 Remediation by soil desorbtion and incineration

With the exception of the area bounded by Mary, Walker, Marquet and Gauthorpe Streets, almost all of the land on the western side of the railway line has needed remediation. Most of the sediments along the sea wall from Oulton Avenue to the northern tip of the peninsula also require(d) remediation. The balance of the bay remains contaminated by numerous chemicals including phthalates, dioxins, lead, heavy metals and polycyclic aromatic hydrocarbons (coal tars), but to a lesser extent than the areas closer to the sea wall on the eastern shore of the bay.

The remediation of the former Union Carbide site, the former Allied Feeds site and a strip of heavily dioxin contaminated sediments in Homebush Bay, have been the subject of extensive analysis, investigations and community activism, including by the Rhodes Peninsula Group. The remediation is approved and monitored by the NSW Department of Environment and Climate Change Contaminated Sites section with extensive community consultation. A strip of sediment in Homebush Bay between 40 and 100 metres wide and about 850 metres long along the eastern foreshore is being excavated and processed by direct thermal desorption and incineration to remove dioxins and other volatile organics. The remediation proposals were subject to a Parliamentary Inquiry by the NSW Standing Committee on State Development Committee. The remediation was completed in February 2011. 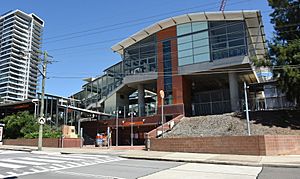 Rhodes railway station is on the Northern Line of the Sydney Trains network. The station is about 30 minutes from the Sydney central business district by rail.

The Ryde Bridge links Rhodes to Ryde, across the Parramatta River. Rhodes is on a major north–south road system through the suburbs of Sydney, the A3. It is close to two main east–west links, Victoria Road to the north and the M4 Western Motorway/Parramatta Road/City West Link to the south.

The Bennelong Bridge across Homebush Bay for buses, emergency services, cyclists and pedestrians opened in May 2016 from Gauthorpe Street in Rhodes to Footbridge Boulevarde in Wentworth Point. The bridge will affect access by boats into the southern part of the bay and its potential use for recreational sailing, although kayaking would be less affected except near the Rhodes shore.

A number of Council and Roads & Maritime Services cycleways run through Rhodes, predominantly along Llewellyn and Walker Streets, joined by Leeds Street and an underpass under Ryde Bridge. There are shared paths along the Homebush Bay foreshore (incomplete in 2010) and immediately to the west of the railway behind the shopping centre and offices in Rider Boulevarde. Cycleways run west to Silverwater Bridge and on to Parramatta on both sides of the river. John Whitton Bridge, which is the former railway bridge joining Rhodes and Meadowbank, has a cycleway and pedestrian walkway. There are links to the cycleway running predominantly along the Cooks River to Botany Bay.

A proposal to build Rhodes ferry wharf was announced in 2015. The wharf was scheduled to join Parramatta River ferry services but safety concerns resulted in the project being deferred in 2016. 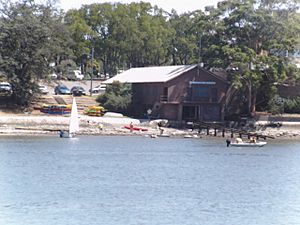 Rhodes has one of the last Fire & Rescue NSW stations staffed wholly by paid volunteers in inner metropolitan Sydney. It was established on land owned by the McIlwaine family, (for whom McIlwaine Park is named). Three generations of the McIlwaine family have been Captain of the Brigade. The fire station is located on Concord road near the intersection with Mary Street on the eastern side of the peninsula.

First Yaralla Sea Scouts has a hall near Ryde Bridge. The hall was rebuilt in brick after the original hall was destroyed by fire. Dragon boat paddling also takes place from this site. The Concord Rhodes Open Sailing Club (now Concord Ryde Sailing Club) operated from King George V park until relocated to Waterview Street Putney (near Yaralla Street) to allow for the building of the duplication of Ryde Bridge.

Rhodes Community Centre is located in Blaxland Road in the former two teacher Rhodes Primary School buildings. Most primary school children in the area now attend Concord West Public School, Strathfield North Public School or Saint Ambrose at Concord West. A community building is planned for the central Homebush Bay foreshore park on the western side of the peninsula and is expected to be completed in 2012.

There is an aged care hostel in Cavell Avenue, built largely on the former Rhodes Public School playground. A Coptic Orthodox church has been built on the site of a former church of another denomination, and additional parish facilities added.

Rhodes Residents Association has represented the community, particularly to local government, for over 20 years. Rhodes Peninsula Group also represents community interests in relation to the Rhodes Remediation and Redevelopment and associated issues and infrastructure.

The river is generally regarded as safe for secondary contact such as sailing. The river around Rhodes is used by rowing crews for training, predominantly in early mornings, late afternoons and on weekends. Sailing from Concord and Ryde Sailing Club can be seen in the distance from McIlwaine and Brays Bay Parks at Rhodes on Saturdays from 1 September to 30 April. Dragon boating is available from near Yaralla Sea Scouts near Ryde Bridge. There is a boat ramp at the northern end of Blaxland Road. There are other ramps at Wharf Road, West Meadowbank and on the eastern side of Silverwater Bridge on the southern side of the river. 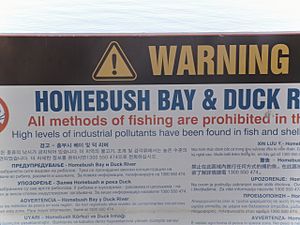 No fishing in Homebush Bay

Fishing is banned in all of Homebush Bay (including from Rhodes and Wentworth Point).

Maritime, a NSW Government instrumentality, owns most of the land on Wentworth Point north of Burroway Road on both sides of Hill Road. Maritime has announced plans for a major boat storage facility with complementary maritime facilities. These are in the planning stage. 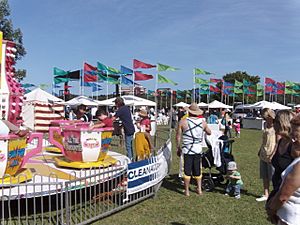 There are a number of foreshore parks in the eastern part of the suburb, including McIlwaine Park, King George V Park, Brays Bay Reserve (which contains the Oliveto restaurant), and Rhodes/Rotary Park. Concord and Ryde Sailing Club was based in King George V Park until construction of the second Ryde Bridge required its demolition, after which the club premises were relocated to Kissing Point in Ryde.

The Kokoda Track Memorial Walkway, which connects Brays Bay Reserve with Concord Hospital, is a memorial to those killed in Papua New Guinea on the Kokoda Track during World War II.

Rhodes features a foreshore path and cycleway, which links to an extensive network of foreshore parks in Sydney. (See Transport above)

All content from Kiddle encyclopedia articles (including the article images and facts) can be freely used under Attribution-ShareAlike license, unless stated otherwise. Cite this article:
Rhodes, New South Wales Facts for Kids. Kiddle Encyclopedia.