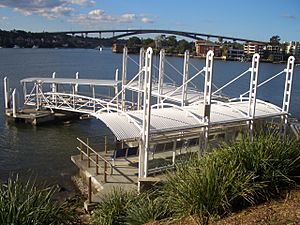 Chiswick is a suburb in the Inner West of Sydney, in the state of New South Wales, Australia. It is located 9 kilometres west of the Sydney central business district in the local government area of the City of Canada Bay. Chiswick sits on the peninsula between Abbotsford Bay and Five Dock Bay, on the Parramatta River. It is surrounded by the suburbs of Abbotsford, Russell Lea and Drummoyne.

The area around Chiswick was first known by its Aboriginal name Bigi Bigi. The suburb was originally part of Five Dock Farm. In the 1850s a Dr Fortescue owned an estate in this area which he named Chiswick after the village on the Thames, west of London. Parramatta River had been known as the 'Thames of the Antipodes' and other nearby suburbs were also named after Thames localities of Greenwich, Woolwich, Henley and Putney.

More recently it has been subjected to an increase in the building of many modern apartment blocks, which has seen the population rise to around 2400.

The Chiswick ferry wharf is used by Parramatta River ferry services. Sydney Buses operate a terminus nearby, with buses running to Circular Quay either via Drummoyne and Victoria Road, or via Leichhardt and Parramatta Road. The bus terminus also has a route running to Campsie Station via Burwood Station. Chiswick has a small group of shops in Blackwall Point Road, close to the ferry wharf.

All content from Kiddle encyclopedia articles (including the article images and facts) can be freely used under Attribution-ShareAlike license, unless stated otherwise. Cite this article:
Chiswick, New South Wales Facts for Kids. Kiddle Encyclopedia.