Kids Encyclopedia Facts
Not to be confused with Great Western Highway.

The M4 Western Motorway (also known as the M4 Motorway or simply M4) is a 46-kilometre-long (29 mi) dual carriageway motorway in western Sydney, New South Wales, Australia. The toll-free motorway stretches from North Strathfield in the east, where it connects with the Great Western Highway/Parramatta Road as the A4 to Glenbrook in west, where it continues as the Great Western Highway as the A32.

The M4 Western Motorway was formerly known as F4 Western Freeway. It used to be part of the Sydney Metroad 4 until 2013, when the new M4 route designation was proclaimed along the whole motorway. 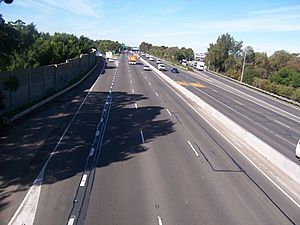 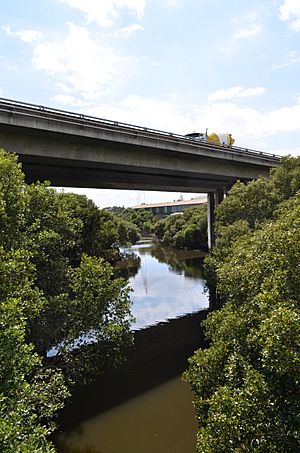 The M4 passing over the Duck River, at Clyde.

The M4 Western Motorway was originally constructed in several stages as the F4 Western Freeway between the late 1960s and the mid-1980s, however a lack of funding resulted in the Wran Labor government halting plans to construct the final stage between Mays Hill and Prospect in 1985. In December 1989 work to construct this stage began as a Build-Own-Operate-Transfer project. In return for funding construction StateWide Roads, the consortium awarded the contract to build the stage, was given permission to toll the section between James Ruse Drive and Silverwater Road as traffic volumes on this section were significantly higher than between Mays Hill-Prospect and would allow a shorter toll period with lower tolls. The concession held by StateWide Roads ended on 15 February 2010, with operation of the motorway returned to the Roads and Traffic Authority and the toll removed.

The Motorway is mostly six lanes wide, and carries constant heavy traffic during daylight hours, seven days a week. Built as a four lane motorway, it was widened to six lanes during 1998 to 2000, but this did little to ease the congestion.

Originally planned in the mid-1950s to start in the Sydney central business district, the eastern section was built only as far west as Pyrmont as part of the North West Expressway, or F3, a freeway that would connect the Sydney and Newcastle central business districts. This section is now part of the Western Distributor. From there it was to have joined with the Western Expressway, the F4, and the Southern Expressway, the F6, in Glebe. At the western end of the Western Freeway as it was known in the late 1960s was to be routed through the Mitchell's Pass area through to Blaxland, however due to protests and the fact that the historical Lennox Bridge was very close to the intended pathway, it was decided to terminate the road at Russell Street, Emu Plains until a solution could be later found. This would have bypassed the Lapstone Hill area and avoided the sharp bends as the road enters Glenbrook. In December 1989 the extension of the freeway from Russell Street, west to the Great Western Highway in the vicinity of Governors Drivee would bypass the narrow and winding section of the Great Western Highway, including the historic Knapsack Bridge. In June 1993, the new section of freeway between Emu Plains and Lapstone was opened to traffic.

On the basis of a pre-election promise made by Premier Wran in 1976, all land reserved for the expressway between Pyrmont and the current eastern termination point at Strathfield was sold off to property developers or declassified as a freeway corridor in 1977 by the State Government.

In 2013, the state government announced the intention to implement a 'Managed Motorway' scheme on the M4 over the coming years to improve traffic flow. Mechanisms to be used include improved Variable Message Signs, Ramp metering signals, dynamic speed and incident management, and an upgrade of the Emergency Telephone System.

In November 2015, it was announced that toll points would be reinstated on the Motorway from 2017 to cover costs of the upgraded Motorway, the M4 East and WestConnex.

When the final section of the M4 (Mays Hill-Prospect section) was opened in 1992, it was allocated Metroad 4. This was the first Metroad to be introduced in Sydney. With the introduction of alphanumeric routes in New South Wales in 2013, Metroad 4 was decommissioned and the entire motorway was allocated the M4 route. The non-motorway section of Metroad 4 was however replaced by A4.

The eastern end of the M4 is currently at North Strathfield, some 15 kilometres (9.3 mi) from the Sydney central business district. Over the years a number of proposals have been made to extend the M4 east towards the city. One plan in the 1990s involved extending the M4 eastwards by approximately 5 kilometres (3.1 mi) so that it would subsequently end in Ashfield and be continuous with the City West Link. Further planned upgrades to the City West Link would mean commuters going west out of the city could get to Parramatta without passing through traffic lights. A subsequent plan outlined a $7 billion plan to link the M4, Victoria Road, City West Link and Sydney Airport using a network of underground tunnels.. Both plans were subsequently shelved, with the NSW state government citing the need for an integrated plan for transport.

In the month prior to the 2011 state election, the NRMA released a report in which it recommended building a tunnel to connect the end of the M4 at Concord and the start of the City West Link, relieving Parramatta Road of enough traffic to convert it into two lanes for slower-moving local traffic, two lanes of light rail and a cycleway. The report argued that this would allow Parramatta Road to be transformed with medium-density housing, shops and cafes and that the $10.04 billion in additional stamp duty and other revenues from this would pay for the $7.38 billion price tag of the project.

The M5 East does connect directly to Port Botany, but it has chronic congestion problems of its own, and doesn't provide easy access to inner western areas of Sydney. There is so much demand for this link, that traffic not only uses the Parramatta Road corridor, but also several back streets to the north and south, most of which are two-lane residential streets.

In October 2012, the NSW government announced their commitment to deliver the WestConnex project, involving widening the existing M4 motorway as well as extending it east with a tunnel from North Strathfield to Taverners Hill. The project also involves duplicating the M5 East tunnel and building a new tunnel linking the M4 and M5 motorways. During the 2013 federal election campaign, then Opposition Leader Tony Abbott announced that if the Coalition was elected his government would commit $1.5 billion to the project.

The tender to design and build the M4 East was awarded to Leighton, Samsung and John Holland in June 2015, with a completion date of 2019.

Stage 3 of the WestConnex scheme would see a new motorway connection running from the end of the M4 at Haberfield to connect with the airport and New M5 at St Peters. This section, in the early planning stage, aims to reduce travel times between Western Sydney and Port Botany while removing heavy vehicles from surface streets in the Inner West. This section is due to open to traffic in 2023.

The first main road west from Sydney was the Great Western Highway, shown above in orange. The County of Cumberland planning scheme provided for a modified route west, much of which was later built as the M4 motorway. At present, the NSW Government proposes to complete the motorway by means of an M4 East tunnel as far east as Wattle Street, with provision for a future tunnel extension to the Anzac Bridge at Victoria Road and the 'new M5' at St Peters.

All content from Kiddle encyclopedia articles (including the article images and facts) can be freely used under Attribution-ShareAlike license, unless stated otherwise. Cite this article:
M4 Western Motorway Facts for Kids. Kiddle Encyclopedia.