Lane Cove is a suburb on the Lower North Shore of Sydney, in the state of New South Wales, Australia. Lane Cove is nine kilometres north-west of the Sydney central business district and is the administrative centre for the local government area of the Municipality of Lane Cove. It is a slow and quiet suburb. Serviced by schools, shops, cafes, restaurants, medical and dental services, recreational facilities and buses. Lane Cove West and Lane Cove North are separate suburbs.

Lane Cove occupies a peninsula on the northern side of Port Jackson (Sydney Harbour), at the opening of the Lane Cove River. It is adjacent to the Lower North Shore suburbs of Riverview, Longueville, Willoughby and Artarmon. The regional administrative and shopping hub of Chatswood is located 2.5 kilometres away. 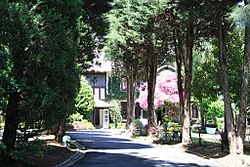 There are a number of possibilities of the origin of the name 'Lane Cove'. The first written use of the name was by Lieutenant William Bradley after he had just sailed along the river in 1788. Some have argued that it was named after Lieutenant Michael Lane, a respected cartographer, who had once worked with Captain Cook. Others say that it was in honour of John Lane, who was the son of the London Lord Mayor at the time as well as a good friend of the first Governor, Arthur Phillip. In any case, the name stuck, and by the 1800s was being used to refer to all the land north of the river.

Prior to the arrival of the First Fleet, the area in which Lane Cove is situated was inhabited by the Cam-mer-ray-gal Group of the Ku-ring-gai Aboriginal Tribe. The group, which inhabited the north shore of Port Jackson, was one of the largest in the Sydney area. There is a strong Aboriginal Community in Lane Cove.

Lieutenant Ralph Clark was the first European to land, a short distance from the entrance to the Lane Cove River on 14 February 1790. There were land grants in 1794 to some privates and non-commissioned officers in the New South Wales Corps, although few of these grants were actually settled as the steep, timbered land was not particularly habitable. However, Lane Cove was an excellent source for timber and other commodities that the settlers required. During the 19th century, farms and dairies were also established. There were also many industrial and manufacturing factories constructed around Greenwich. A detailed history of the early years of Lane Cove is found in Ball. John and Pam, Revisiting the early history of Lane Cove, 2010, Oughtershaw Press, ISBN 978-0-9593420-7-9. 253 pages.

Most of the residential growth in the area however occurred after World War II when returning soldiers were granted blocks of land around Lane Cove. The land value, which was relatively cheap during this time, surged during the 1980s and 1990s when the water views, large suburban blocks, ease of transport and quiet streets became popular.

In 2005, Lane Cove briefly caught the attention of the world's press when part of an apartment block (which is now classified as being in the new suburb of North Lane Cove) collapsed into an excavation for the Lane Cove Tunnel and a pet bird in the evacuated block was rescued by a robot.

Lane Cove North was split off to become a separate suburb on 20 January 2006.

The tram service to Lane Cove opened as an electric line from Crows Nest in February, 1900, with trams connecting with other electric services at Ridge St. It was initially opened as far as Gore Hill and extended to Lane Cove in March, 1909. Some through services operated to and from Milsons Point.

In September 1909, a new line was opened from McMahons Point to Victoria Cross, North Sydney and a new direct route was opened via what is now the Pacific Highway from Victoria Cross to Crows Nest. Services to Lane Cove and Chatswood were altered to operate to and from McMahons Point via the new direct route to Crows Nest, in conjunction with the construction of the Sydney Harbour Bridge.

From Lane Cove a cross regional service to Balmoral was also available. Upon departure from the Lane Cove terminus opposite the council chambers, trams travelled north on Longueville Road turning right onto the Pacific Highway. At Crows Nest, separate lines branched left onto Falcon Street, travelling through Cammeray, Neutral Bay, Cremorne Junction and Mosman before Joining Military Road. The line then split into two separate lines at the intersection of Middle Head Road and Bradleys Head Road. Turning left into Gordon Street off Middle Head Road, the line then entered on to its own off road reservation, crossing several small residential streets as it wound its way down to Henry Plunkett Reserve, entering The Esplanade near the corner of Botanic Road and terminating near Hunters Parade.

The Gore Hill Freeway, which brings traffic from the city, the airport and southern suburbs connects to two major roads at Lane Cove - the Pacific Highway which travels north and Epping Road which goes north-west. The traffic problems at these intersections led to the construction of the Lane Cove Tunnel, which takes vehicles straight from the Gore Hill Expressway to the M2. Cars can now travel from the Baulkham Hills Shire to the airport without having to pass a single set of traffic lights (although there are tolls to pay in each direction). Since the opening of the Lane Cove Tunnel, two lanes of Epping Road between Mowbray Road and Lane Cove have been removed, with the left lane in each direction becoming a Bus Lane, reducing Epping Road in some sections to one lane in each direction for general traffic and increasing congestion. Getting in and out of Lane Cove can take 20 - 30 minutes in a car in peak hour.

Lane Cove was the terminus of one of Sydney's northern tram lines, which closed in the late 1950s. Trams operated to Wynyard in the city and Balmoral via Crows Nest. The current 254 bus route largely follows the city route from Longueville Road to Wynyard via Crows Nest and North Sydney. The 140 bus route From Manly to Epping follows a large section of the old Balmoral route. A new major bus interchange constructed at the intersection of Epping Road and Longueville Road, as part of the Lane Cove tunnel works, opened in March 2008 with approximately 25 separate bus routes (including school routes) operating from here. This provides connections to north-west Sydney with services to Pennant Hills and Rouse Hill operated by HillsBus, and publicly operated services to Chatswood, Epping, North Sydney, Manly, Gladesville and Drummoyne. City (QVB) Express services are extremely busy during morning peak.

A cyclepath has been constructed along the southern edge of Epping Road from the Pacific Highway to the Lane Cove River. This cyclepath links to the Gore Hill Freeway Cyclepath. Connecting cyclepaths allow cyclists to journey to Chatswood, North Sydney, Willoughby and the Macquarie Park area.

A ferry service that travels someway down the Lane Cove River, stops at Longueville Wharf and Greenwich Wharf.

The closest train stations are quite a distance away at Chatswood, Artarmon, and St Leonards. It is not surprising that according to the 2001 census, only 4.1% of the population travelled to work by train alone. Other ways to travel include the train and bus (1.7%), walking or cycling (5.9%), the bus only (14.3%), and car (71.0%).

Schools in Lane Cove are:

Annual festivals are the Lane Cove Autumn Harmony Festival and the Cameraygal Festival.

Churches in Lane Cove are:

Around 16% of the area is devoted to public recreational areas including Burns Bay Park, Tambourine Bay Park, Pottery Green, Blackman Park and Tantallon Oval. As well as this there is a large amount of bushland surrounding the river's edge especially near Riverview and Lane Cove West. Lane Cove also has many small creeks and rivers that flow through it and therefore has many expanses of bushland. The Lane Cove River is the largest river in the area. Lane Cove National Park is located close to the suburb. The Lane Cove Bushland Park is home to an endangered species of fungus, Hygrocybe lanecovensis, which is found nowhere else. The species was discovered in the 1990s.

According to the 2011 census, the suburb of Lane Cove had a population of 9,474 people. Of these:

In 2009, the shopping centre on Longueville Road was used in the filming of Underbelly: The Golden Mile depicting Darlinghurst Road, Kings Cross.

All content from Kiddle encyclopedia articles (including the article images and facts) can be freely used under Attribution-ShareAlike license, unless stated otherwise. Cite this article:
Lane Cove Facts for Kids. Kiddle Encyclopedia.