Linley Point is a small peninsular suburb located on the north western side of Sydney Harbour, in the local government area of the Municipality of Lane Cove, in the state of New South Wales, Australia. It is approximately 10 kilometres north-west of the Sydney central business district by car.

Linley Point is situated between the peninsula of Hunters Hill and Woolwich to the south, and Lane Cove to the north. It is less than 10 km to the Sydney CBD by car. Most of Linley Point is surrounded by the Lane Cove River, and is accessed from the south over Figtree Bridge, and from the north via Burns Bay Road. Due to its elevation many houses have spectacular views of the river and Sydney city, with some houses also having views of the Sydney Harbour Bridge.

Linley Point is one of the smallest suburbs in Sydney, with 131 dwellings. It has undergone significant redevelopment, particularly of older homes. Linley Point is also home to several historic houses, including the NSW heritage listed "Linley House" on View Street, and "Rockcliffe" on Lower Brooks Street.

Linley Point has a relatively large park situated on The Crescent. It is often used for annual get-together events by Linley Point residents. New playground equipment and landscaping were added to the park in 2012. The changing demographics of the suburb has seen the park regularly used by local children.

There is only one access road in and out of Linley Point, being View St. There is a Sydney Buses bus stop on Burns Bay Road near View St, which has buses going to Chatswood and Gladesville, as well as school bus services. The closest Sydney Ferries wharf is either Woolwich or Huntleys Point. 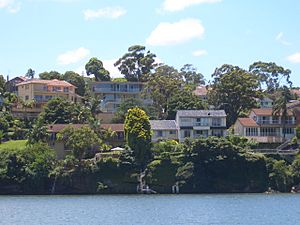 All content from Kiddle encyclopedia articles (including the article images and facts) can be freely used under Attribution-ShareAlike license, unless stated otherwise. Cite this article:
Linley Point, New South Wales Facts for Kids. Kiddle Encyclopedia.