Five Dock is a suburb in the Inner West of Sydney, in the state of New South Wales, Australia. Five Dock is located 10 kilometres west of the Sydney central business district, in the local government area of the City of Canada Bay. 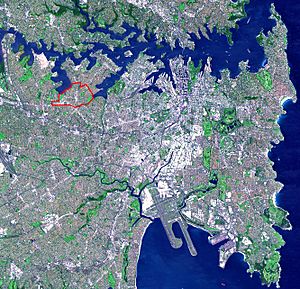 Five Dock lies roughly at the foot, or southern end, of the Drummoyne peninsula. More precisely, Five Dock lies between Parramatta Road and the City West Link Road to the south and Hen and Chicken Bay, on the Parramatta River, along with the suburbs of Wareemba and Russell Lea, to the north. Its total area is 2.45 km².

From the heart of the shopping centre, it is approximately 7.5 kilometres to Sydney's central business district, measured in a straight line from the original Sydney General Post Office in Martin Place. By road, this same distance is about 9-10 kilometres, depending on the route taken.

Originally, the local post office was called the "Wareemba Locality store", but after the geographical location was changed it was the named to the "Wareemba Post Office". 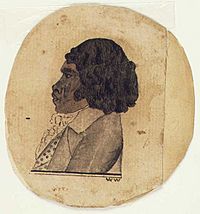 Governor Phillip's notes suggest that an outbreak of smallpox in early 1789 would have had a devastating impact on the indigenous population in Canada Bay. 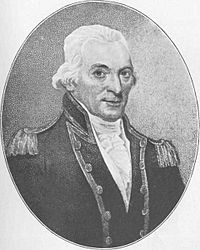 The earliest written reference to Five Dock is in The Sydney Gazette of 3 February 1805, which mentions Five Dock Bay. However, the name probably dates back to the days of the First Settlement. All of the sources referenced are in agreement that it was derived from the shape of the bay along the Parramatta River.

According to a publication from the Maritime Services Board, Port of Sydney, (Volume 9, No 3, September 1965), "At the NE point of the bay there were five water worn indentations that were likened to docks, hence the name Five Dock." There is widely contradictory information, however, about how many of these natural formations still exist. The Maritime Services Board publication concludes that there "are two of the five remaining". However, Eric Russell's Drummoyne: a western suburbs' history from 1794 states that one was lost with the construction of the 1881 Gladesville Bridge, but "the others remain in 1982". Other sources give different numbers again. 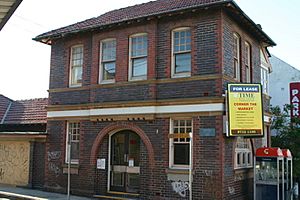 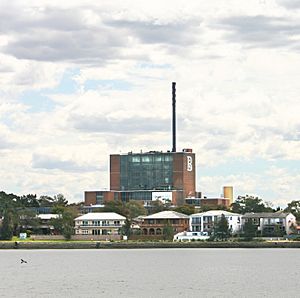 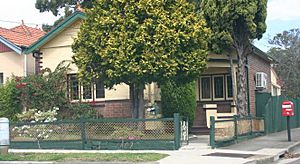 Housing in Five Dock consists mainly of detached dwellings. Like many suburbs in the inner-west of Sydney, Five Dock has some well-preserved examples of Australian Federation architecture and California Bungalow style residences. Many of these homes have been renovated however, and have not retained all of their original features.

Many dwellings in Five Dock are detached houses, frequently with generously sized gardens. According to the 2011 census, of the 3,760 dwellings in the suburb, 1,676 consist of separate houses, 472 were other types of houses and 1,228 were flats or apartments. Despite the preponderance of houses, Post-World War II development has involved a high proportion of apartment construction. Recently, several major residential developments have been completed. An example is the 'Pendium' development in Garfield Street, which includes 102 apartments, a refurbished supermarket and the local library. Another recent example is the redevelopment of the former EnergyAustralia site in Fairlight Street into 93 units [1].

As of October 2005, there are a total of 51 items in the suburb that are heritage listed by the NSW Heritage Office. In addition, the skateboard track in Five Dock Park is being considered for listing as a heritage item under the State Heritage Items Project [2].

Houses along the Bay run in Five Dock

Five Dock has two separate stretches of publicly accessible foreshore on the Parramatta River. One of these foreshore stretches constitutes a small section of the Bay Run, a popular 7 km walking and cycling track which passes through several other suburbs along its way around Iron Cove. The other foreshore area lies on Hen and Chicken Bay and Kings Bay, and features a pedestrian and bike path leading around the bay towards Abbotsford.

In addition, there are several public parks located around Five Dock, the three largest being Timbrell Park, Five Dock Park and Halliday Park. A large section of Barnwell Park Golf Course, which is owned by Canada Bay Council, is located in Five Dock. The northern part of the golf course lies on reclaimed land.

Five Dock Park is listed on the NSW Heritage Office State Heritage Register and centres around The Five Dock War Memorial. The plaque at the memorial says that the foundation stone was laid in 1923. The memorial was renovated and rededicated in 1987. The park also contains a number of recreational facilities, including a large skate boarding area, a bowling club, tennis courts, an oval (used for junior rugby league matches and cricket), childcare facilities and an off-leash area for dogs. Originally constructed in 1979, the park's skate boarding and bmx area was extremely popular during the 1980s but gradually fell into disrepair. An article published in the Village Voice in 2002 said the National Skateboarders' Association had nominated Five Dock skate park as one of the three worst in NSW because it was in such a poor condition, with a subsequent article discussing calls for its upgrade. The new skatepark opened in 2007 was built next to the 'old bowl' and was designed by Mick Mulhall.[3].

Five Dock is well-connected to the city centre and surrounding suburbs by public Sydney bus routes.

Croydon Station was originally named Five Dock Station when it opened in 1875. The name was changed to Croydon soon afterwards.

A man in costume at Ferragosto

Five Dock is an established suburb with a population of 8,747 in the 2011 census. Like the nearby suburbs of Haberfield and Leichhardt, Five Dock has a large population of Italian immigrants. According to the 2011 census about 1 in 5 residents claim Italian ancestry and roughly 10% of the population was born in Italy. This Italian influence is reflected in several ways, for instance in the style of the suburb's restaurants, cafes and delis. Five Dock Public School has had an Italian language teaching program since 1981 and there are local private language schools offering Italian classes. In addition, Five Dock has an annual street festival called Ferragosto, based on the traditional Italian festival of the same name.

All content from Kiddle encyclopedia articles (including the article images and facts) can be freely used under Attribution-ShareAlike license, unless stated otherwise. Cite this article:
Five Dock, New South Wales Facts for Kids. Kiddle Encyclopedia.