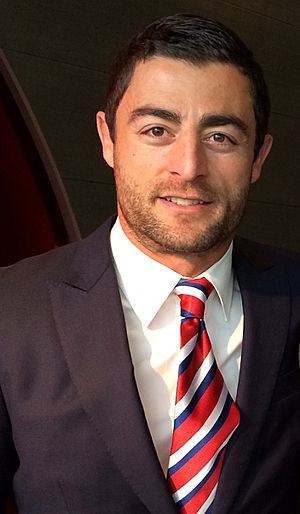 Anthony Minichiello (born 24 May 1980) is an Australian former professional rugby league footballer. He played his entire career (2000–14) for the Sydney Roosters of the National Rugby League, captaining them for his final two seasons. He played more games and scored the most tries for the club than any other player in its history. He played in six grand finals, winning two in 2002 and 2013.

Minichiello was born in Liverpool, in south-west Sydney, New South Wales. He is of Italian ancestry. His younger brother, Mark, also plays rugby league. He has been married to shoe designer Terry Biviano since January 2012. In December 2013, their daughter, Azura Trésor, was born.

All content from Kiddle encyclopedia articles (including the article images and facts) can be freely used under Attribution-ShareAlike license, unless stated otherwise. Cite this article:
Anthony Minichiello Facts for Kids. Kiddle Encyclopedia.