CSIRAC ( Commonwealth Scientific and Industrial Research Automatic Computer), originally known as CSIR Mk 1, was Australia's first digital computer, and the fifth stored program computer in the world. It is the oldest surviving first-generation electronic computer (the Zuse Z4 at the Deutsches Museum is older, but was electro-mechanical, not electronic), and was the first in the world to play digital music.

After being exhibited at Melbourne Museum for many years, it was relocated to Scienceworks in 2018 and is now on permanent display in the Think Ahead gallery.

The CSIRAC was constructed by a team led by Trevor Pearcey and Maston Beard, working in large part independently of similar efforts across Europe and the United States, and ran its first test program (multiplication of numbers) sometime in November 1949. In restricted operation from late 1950, publicly demonstrated and operational in 1951.

The machine was fairly representative of first-generation valve-driven computer designs. It used mercury acoustic delay lines as its primary data storage, with a typical capacity of 768 20-bit words (later doubled), supplemented by a parallel disk-type device with a total 1024-word capacity and an access time of 10 milliseconds. Its memory clock ran at 1000 Hz, and the control unit, synchronized to the clock, took two cycles to execute an instruction (later the speed was doubled to one cycle per instruction). The bus (termed the "digit trunk" in their design) is unusual compared to most computers in that it was serial—it transferred one bit at a time.

Most of CSIRAC's approximately 2000 valves were of the types 6SN7, 6V6, EA50 diodes and KT66. George Semkiw later redesigned the drum-read electronics to use germanium transistors.

Input to the machine was performed in the form of punched paper tape, after experiments with punch cards proved unsatisfactory. The machine was controlled through a console which allowed programs to be stepped through one instruction at a time, and featured CRT displays which showed the contents of registers. Output was through a standard teleprinter or to punch tape.

The instruction set was minimal, but supported the basic set of arithmetic and logical operations, as well as conditional and relative jumps (making it possible to write a library of subroutines). Instructions consisted of three components: a 5-bit "destination" P1-P5, a 5-bit "source" P6-P10, and a 10-bit "address" P11-P20. For instructions that used the main store, the 6 bits P15-P20 selected one of the 64 logical delay lines. Bits P11-P14 determined the time at which 20 bits of data were written to or extracted from the delay line, and thus represented address of a word within the selected delay line. There were 32 destination gates and 32 source gates; the 10 address bits identified a data word within the store if either the source or destination required access to the store. The total number of source and destination combinations, or different instruction functions, was 1024, although only about 256 of these were used often.

The machine, like all machines of the era, had no operating system. A high-level interpreted programming language called INTERPROGRAM was developed in 1960 by Geoff Hill. It was similar to early forms of BASIC, which was designed in 1963 for the 20-bit transistorized GE-200 series.

In 1950 CSIRAC was used to play music, the first known use of a digital computer for the purpose. The music was never recorded, but it has been accurately reconstructed. 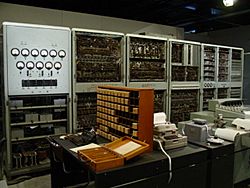 In 1955, with the CSIRO's decision that computing research was outside its purview, the machine was transferred from its home at the Radiophysics Laboratory at the CSIRO in Sydney, to the University of Melbourne, where it formed Australia's only academic computing facility until late 1956. Many pioneers of computer use in Australia had their first exposure to computing there.

In 1964, CSIRAC was shut down for the last time. Its historical significance was already recognised at that stage, and it was placed in storage with plans for its later exhibition in a museum.

Interest in the machine was revived in the 1990s, as it was realised that many of its developers were aging and history was being lost forever. A conference about the machine was held in 1996.

The machine found a permanent home with Museums Victoria in 2000. It has not been operable since its shutdown, but many of the programs that ran on it have been preserved, and an emulator has been written for it. The curators have decided that, aside from the cost of restoring the device, the huge number of repairs that would be required to make it safe to operate (CSIRAC used 30 kilowatts of power in operation) would detract from its historical authenticity.

After being exhibited at Melbourne Museum for many years, it was relocated to Scienceworks in 2018 and is now on permanent display in the Think Ahead gallery.

CSIRAC is listed on the Victorian Heritage Register and is included in a Heritage Overlay.

It is listed as a National Engineering Landmark by Engineers Australia as part of its Engineering Heritage Recognition Program.

All content from Kiddle encyclopedia articles (including the article images and facts) can be freely used under Attribution-ShareAlike license, unless stated otherwise. Cite this article:
CSIRAC Facts for Kids. Kiddle Encyclopedia.