The Parkes Observatory (also known informally as "The Dish") is a radio telescope observatory, located 20 kilometres (12 mi) north of the town of Parkes, New South Wales, Australia. It was one of several radio antennae used to receive live television images of the Apollo 11 Moon landing. Its scientific contributions over the decades led the ABC to describe it as "the most successful scientific instrument ever built in Australia" after 50 years of operation.

The Parkes Observatory is run by the Commonwealth Scientific and Industrial Research Organisation (CSIRO), as part of the Australia Telescope National Facility (ATNF) network of radio telescopes. It is frequently operated together with other CSIRO radio telescopes, principally the array of six 22-metre (72 ft) dishes at the Australia Telescope Compact Array near Narrabri, and a single 22-metre (72 ft) dish at Mopra (near Coonabarabran), to form a very long baseline interferometry array.

The observatory was included on the Australian National Heritage List on 10 August 2020.

The Parkes Radio Telescope, completed in 1961, was the brainchild of E. G. "Taffy" Bowen, chief of the CSIRO's Radiophysics Laboratory. During the Second World War, he had worked on radar development in the United States and had made connections in its scientific community. Calling on this old boy network, he persuaded two philanthropic organisations, the Carnegie Corporation and the Rockefeller Foundation, to fund half the cost of the telescope. It was this recognition and key financial support from the United States that persuaded Australian prime minister, Robert Menzies, to agree to fund the rest of the project.

The Parkes site was chosen in 1956, as it was accessible, but far enough from Sydney to have clear skies. Additionally the mayor Ces Moon and landowner Australia James Helm were both enthusiastic about the project.

The success of the Parkes telescope led NASA to copy the basic design in their Deep Space Network, with matching 64-metre (210 ft) dishes built at Goldstone, California, Madrid, Spain, and Tidbinbilla, near Canberra in Australia.

It continues to be upgraded, and as of 2018 is 10,000 times more sensitive than its initial configuration. 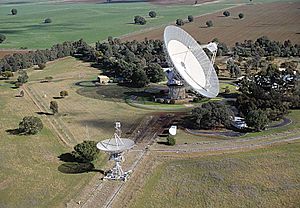 The inner part of the dish is solid metal and the outer area a fine metal mesh, creating its distinctive two-tone appearance.

In the early 1970s the outer mesh panels were replaced by perforated aluminium panels. The inner smooth plated surface was upgraded in 1975 which provided focusing capability for centimetre and millimetre length microwaves.

The inner aluminium plating was expanded out to a 55 metres (180 ft) diameter in 2003, improving signals by 1dB.

The telescope has an altazimuth mount. It is guided by a small mock-telescope placed within the structure at the same rotational axes as the dish, but with an equatorial mount. The two are dynamically locked when tracking an astronomical object by a laser guiding system. This primary-secondary approach was designed by Barnes Wallis. 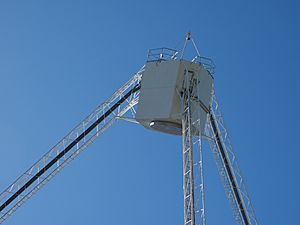 The focus cabin is located at the focus of the parabolic dish, supported by three struts 27 metres (89 ft) above the dish. The cabin contains multiple radio and microwave detectors, which can be switched into the focus beam for different science observations.

The 18-metre (59 ft) "Kennedy Dish" antenna was transferred from the Fleurs Observatory (where it was part of the Chris Cross Telescope) in 1963. Mounted on rails and powered by a tractor engine to allow the distance between the antenna and the main dish to be easily varied, it was used as an interferometer with the main dish. Phase instability due to an exposed cable meant that its pointing ability was diminished, but it was able to be used for identifying size and brightness distributions. In 1968 it successfully proved that Radio galaxy lobes were not expanding, and in the same era contributed to Hydrogen line and OH investigations. As a stand-alone antenna it was used in studying the Magellanic Stream.

It was used as an uplink antenna in the Apollo program, as the larger Parkes telescope is receive only. It is preserved by the Australia Telescope National Facility.

The observatory is a part of the Australia Telescope National Facility network of radio telescopes. The 64-metre (210 ft) dish is frequently operated together with the Australia Telescope Compact Array at Narrabri, the ASKAP array in Western Australia, and a single dish at Mopra, telescopes operated by the University of Tasmania as well as telescopes from New Zealand, South Africa and Asia to form a Very Long Baseline Interferometry (VLBI) array. 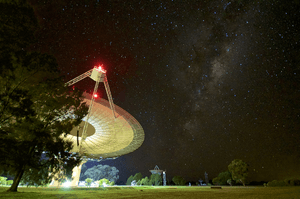 The Parkes observatory is positioned to be isolated from radio frequency interference. The site also sees dark skies in optical light, as seen here in June 2017 with the Milky Way Galaxy overhead.

In 1998 Parkes telescope began detecting fast radio bursts and similar looking signals named perytons. At the time it was theorised FRBs might be signals from another galaxy, emissions from neutron stars becoming black holes. Perytons were thought to be of terrestrial origin, such as interference from lightning strikes. In 2015 it was determined that perytons were caused by staff members opening the door of the facility's microwave oven during its cycle. When the microwave oven door was opened, 1.4 GHz microwaves from the magnetron shutdown phase were able to escape. Subsequent tests revealed that a peryton can be generated at 1.4 GHz when a microwave oven door is opened prematurely and the telescope is at an appropriate relative angle.

The telescope has been contracted to be used in a search for radio signals from extraterrestrial technologies for the heavily funded project Breakthrough Listen. The principal role of the Parkes Telescope in the program will be to conduct a survey of the Milky Way galactic plane over 1.2 to 1.5 GHz and a targeted search of approximately 1000 nearby stars over the frequency range 0.7 to 4 GHz. 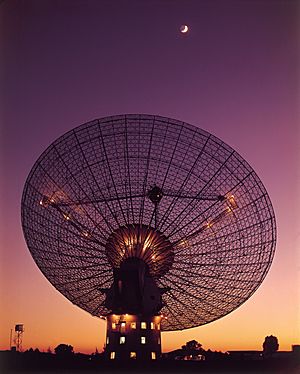 The 64-metre (210 ft) radio telescope at Parkes Observatory as seen in 1969, when it received signals from the Apollo 11 Moon landing

During the Apollo missions to the Moon, the Parkes Observatory was used to relay communication and telemetry signals to NASA, providing coverage for when the Moon was on the Australian side of the Earth.

The telescope also played a role in relaying data from the NASA Galileo mission to Jupiter that required radio-telescope support due to the use of its backup telemetry subsystem as the principal means to relay science data.

The observatory has remained involved in tracking numerous space missions up to the present day, including:

When Buzz Aldrin switched on the TV camera on the Lunar Module, three tracking antennas received the signals simultaneously. They were the 64-metre (210 ft) Goldstone antenna in California, the 26-metre (85 ft) antenna at Honeysuckle Creek near Canberra in Australia, and the 64-metre (210 ft) dish at Parkes.

Since they started the spacewalk early, the Moon was only just above the horizon and below the visibility of the main Parkes receiver. Although they were able to pick up a quality signal from the off axis receiver, the international broadcast alternated between signals from Goldstone and Honeysuckle Creek, the latter of which ultimately broadcast Neil Armstrong's first steps on the Moon worldwide. 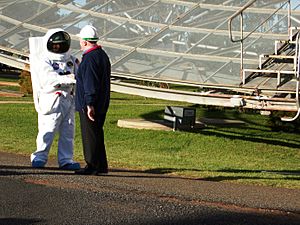 Celebrations on 19 July 2009 to mark the 40th anniversary of the Moon landing, and Parkes' role in it. "The Dish" behind is at full extension to the ground.

A little under nine minutes into the broadcast, the Moon rose far enough to be picked by the main antenna and the international broadcast switched to the Parkes signal. The quality of the TV pictures from Parkes was so superior that NASA stayed with Parkes as the source of the TV for the remainder of the 2.5-hour broadcast.

In the lead up to the landing wind gusts greater than 100 km/h (62 mph) were hitting the Parkes telescope, and the telescope operated outside safety limits throughout the moonwalk.

In 2012 the observatory received special signals from the Mars rover Opportunity (MER-B), to simulate the Curiosity rover UHF radio. This helped prepare for the then upcoming Curiosity (MSL) landing in early August—it successfully touched down on 6 August 2012.

The Parkes Observatory Visitors Centre allows visitors to view the dish as it moves. There are exhibits about the history of the telescope, astronomy, and space science, and a 3-D movie theatre.

In 1995 the radio telescope was declared a National Engineering Landmark by Engineers Australia. The nomination cited its status as the largest southern hemisphere radio telescope, elegant structure, with features mimicked by later Deep Space Network telescopes, scientific discoveries and social importance through "enhancing [Australia's] image as a technologically advanced nation".

On Monday, 31 October 2011, Google Australia replaced its logo with a Google Doodle in honour of Parkes Observatory's 50th anniversary.

The Parkes Radio Telescope was added to the National Heritage List in 2020.

In November 2020, in NAIDOC Week, the Observatory's three telescopes were given Wiradjuri names. The main telescope ("The Dish") is Murriyang, after the home in the stars of Biyaami, the creator spirit. The smaller 12m dish built in 2008 is Giyalung Miil, meaning "Smart Eye". The third, decommissioned antenna is Giyalung Guluman, meaning "Smart Dish".

All content from Kiddle encyclopedia articles (including the article images and facts) can be freely used under Attribution-ShareAlike license, unless stated otherwise. Cite this article:
Parkes Observatory Facts for Kids. Kiddle Encyclopedia.