Alaea salt, sometimes referred to as Hawaiian red salt, is an unrefined sea salt that has been mixed with an iron oxide rich volcanic clay called ʻalaea, which gives the seasoning its characteristic brick red color . It is part of Native Hawaiian cuisine and is used in traditional dishes such as kalua pig, poke, and pipikaula (Hawaiian jerky). It was also traditionally used to cleanse, purify and bless tools, canoes, homes and temples. Once exported to the Pacific Northwest to cure salmon, it saw a resurgence in popularity late in the 20th century in fusion style cuisine of Hawaii both on Islands and beyond. 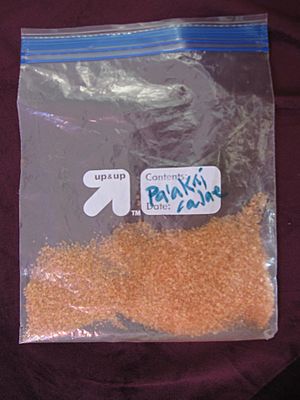 It is claimed by one author that most alaea salt sold in the United States is produced in California, not in Hawaii. True Hawaiian-made alaea salt is expensive and before the rise of convenient Internet shopping was difficult to find elsewhere.

Alaea salt gets its characteristic brick red color from a volcanic Hawaiian clay called ʻalaea, which contains some 80 minerals and is rich in iron oxide.

All content from Kiddle encyclopedia articles (including the article images and facts) can be freely used under Attribution-ShareAlike license, unless stated otherwise. Cite this article:
Alaea salt Facts for Kids. Kiddle Encyclopedia.