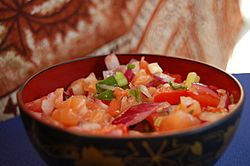 Lomi salmon (more commonly known as lomi-lomi salmon) is a side dish in Hawaiian cuisine. It is a fresh tomato and salmon salad, and was introduced to Hawaiians by early Western sailors. It is typically prepared by mixing salted, shredded salmon with tomatoes, sweet Maui onions, and occasionally scallions, and sometimes crushed ice if it is not refrigerated. It is always served cold.

The name lomi-lomi salmon is taken from the method of preparation. The shredding (dicing) and mixing of the salmon is done by massaging the salted fish with other ingredients by hand (lomi-lomi is Hawaiian for "to massage").

All content from Kiddle encyclopedia articles (including the article images and facts) can be freely used under Attribution-ShareAlike license, unless stated otherwise. Cite this article:
Lomi-lomi salmon Facts for Kids. Kiddle Encyclopedia.