The Lumaha'i River (ahupuha’a) is a river of northern Kauai, Hawaii, US. It begins in a narrow, high-walled valley in the central mountains and enters the Pacific Ocean on the northwestern coast of the island, just east of Wainiha, on the western edge of Lumaha'i Beach. Unaffected by development, its pristine waters contain populations of o'opu (Stenogobius hawaiiensis) and hihiwai (shellfish) as well as the Hawaiian coot. During heavy rainfall in winter and spring, it is prone to flooding. The Lumaha'i River Bridge traverses the waterway. 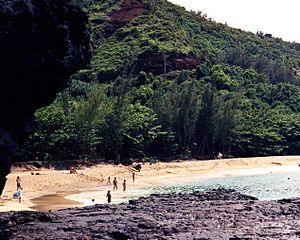 Lumaha‘i Beach at the mouth of the river

The Lumaha'i River rises in the central mountains of Kauai at an elevation of 430 metres (1,410 ft). It drains a catchment area of 23 square miles (60 km2). After flowing through a narrow valley with cliff banks, it opens out midway along its course into a wide valley, where the banks of the river are steep. The river debouches into the Pacific Ocean on the northwestern coast of the island, just east of Wainiha, on the western edge of Lumaha'i Beach. The beach at the western end, formed at the mouth of the river, is called the Lumaha‘i Beach which is located 1.4 miles (2.3 km) to the northwest of Hanalei. Measuring 4,000 feet (1,200 m) in length, the beach has rocky features at the mouth of the Lumaha'i River, which results in treacherous "rip currents". The beach is remembered as the scenic location for a song sequence in the 1958 film South Pacific.

Rock formations at the mouth of the river are of a red colour, and are known as Ka-‘alele, meaning "messenger". Even during low tides, the waves on the beach are very strong, with no reefs in the waters. A black lava formation abuts the west bank near the mouth which is named Ke-alelo-O-Pilikua, meaning "tongue of Pilikua".

In the hills of the river valley there is a rock formation known to the Hawaiians as Ma’ina-kehau, which is a very large boulder resembling a man with a "grey body and white head". There is natural fall midway along the river course where there is a carved flat rock formation, said to have been brought from Wainiha by the Menehune. This rock is called Pa-na’nana’a, meaning "protruding dish"; one half of this rock is of a black colour and the other half is grey. 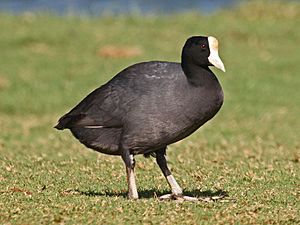 Unaffected by development, its pristine waters contains populations of o'opu (Stenogobius hawaiiensis) and hihiwai (shellfish) and the Hawaiian coot. It is reported that wi, a fresh water shell fish species is seen on the grey colour part of the Pa-na’nana’a rock during day time whereas it appears on black colour side of the rock in the night.

Hawaii's lowland wet forest in the Lumaha'i valley has more than 12 rare plants. Also found are colonies of migratory seabirds which include the Newell's shearwater and Hawaiian petrel.

There are three notable species of trees at the mouth of the river and these are: the hibiscus of Maihi, the breadfruit of Weli and the pendanus of Mapuana.

All content from Kiddle encyclopedia articles (including the article images and facts) can be freely used under Attribution-ShareAlike license, unless stated otherwise. Cite this article:
Lumahaʻi River Facts for Kids. Kiddle Encyclopedia.