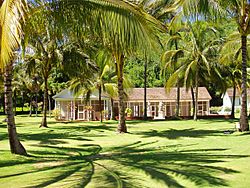 Allerton Garden, also known as Lāwaʻi-kai, is a botanical garden, originally created by Robert Allerton and John Gregg Allerton, located on the south shore of Kauai, Hawaii. The garden covers an 80-acre (320,000 m2) area and is situated beside the Lāwaʻi Bay, in a valley transected by the Lāwaʻi Stream. It is one of the five gardens of the non-profit National Tropical Botanical Garden.

Queen Emma of Hawaii resided above this valley for a short interval, and a modest house that was perhaps her residence has subsequently been moved to the valley floor and renovated. The entire valley, including what is now the adjacent McBryde Garden, was purchased by the McBryde family in the late 19th century for a sugarcane plantation.

Robert Allerton, who had a lifelong passion for garden design, sculpture, and landscape architecture had already expressed it at "The Farms" estate and sculpture gardens in Illinois (now Robert Allerton Park). His adopted son John Gregg Allerton had studied architecture at the University of Illinois in the 1920s. In 1938 they came to Hawaii and purchased a relatively small portion of Queen Emma's plantation for a residence and gardens. They quickly began designing the landscape master plan and individual gardens, incorporating Hawaiian and new plants they had acquired from tropical Asia and other Pacific Islands, built landscape elements, and sculptures from "The Farms."

This picturesque setting has been used in a number of films and TV shows, including South Pacific, Donovan's Reef, Jurassic Park, Pirates of the Caribbean, Starsky and Hutch and Magnum, P.I.

All content from Kiddle encyclopedia articles (including the article images and facts) can be freely used under Attribution-ShareAlike license, unless stated otherwise. Cite this article:
Allerton Garden Facts for Kids. Kiddle Encyclopedia.